END_OF_DOCUMENT_TOKEN_TO_BE_REPLACED

Welcome to Part Three: the final part of our report on VSCC Prescott on 3rd and 4th August.

In Part One we looked at the racers and in Part Two the pre-war cars.  Now we’ll look at the post-war cars that we found in the car parks.

As in Parts One and Two, we’ll give you a mix of pictures of the cars, stuff we know about them and stories we heard on the day.  We hope you enjoy Part Three: The Post-War Cars… 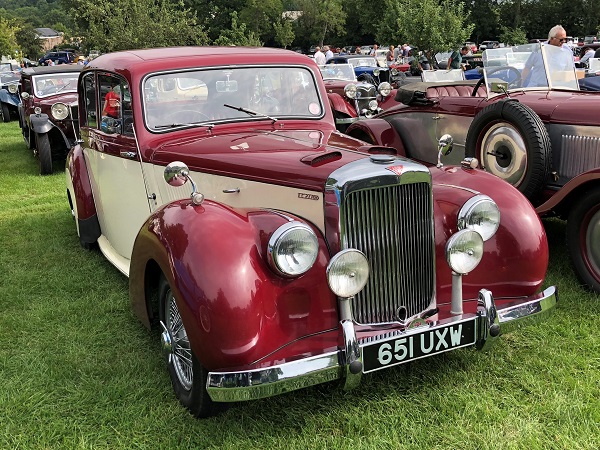 The TC 21 3-litre 6-cylinder car was produced by the Alvis factory from 1953 as a replacement for the TA 21.  With sales falling and the Alec Issigonis V8 replacement delayed (and eventually abandoned), something had to be done quickly.  The result, just in time for the Earls Court Motor Show in the autumn of 1953, was the more sporting TC 21/100.  It was given wire wheels and bonnet scoops and, even more importantly, a higher final drive and higher compression to release 100 bhp and the ability to achieve a genuine 100 mph.  The new car was bodied by Mulliner and examples appeared on the Alvis and Mulliner stands; the one on the Alvis stand was painted in metallic grey and thus immediately gained this model the ‘Grey Lady’ name by which it has since been known.  This lovely example dates from 1955, the last year of production before its replacement by the limited-production Graber TC 108G that ultimately developed into the TD, TE and TF models that would take Alvis to the end of car production in 1967.

The badge and bonnet vents that distinguish the famed ‘Grey Lady’ 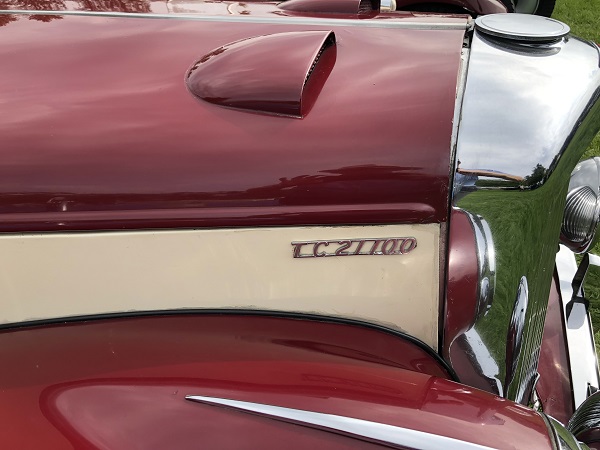 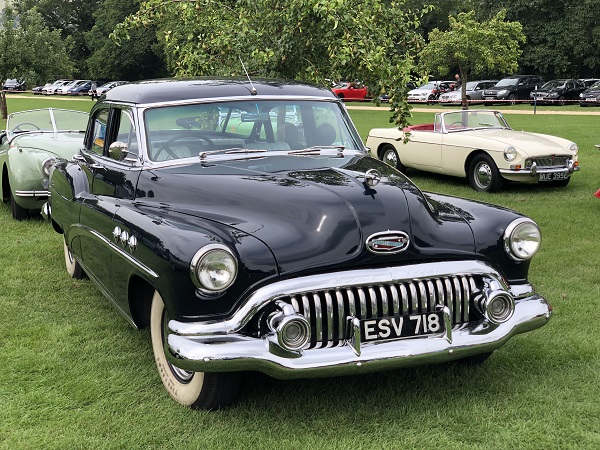 This Buick is rare in a very special way.  It is a right-hand-drive car because it was originally sold in South Africa.  Beautifully restored, it is powered by a 263 cu. In. (4.3-litre) straight eight.  If you Google the description and the registration number you can see a video of the car starting up – accompanied by the highly appropriate words “Let’s rock ‘n roll” – and of a tour around the outside and inside of the car. 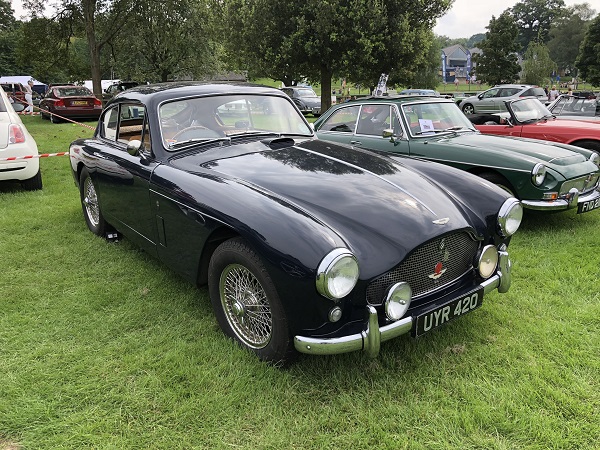 The last of the David Brown Aston Martins to be powered by the Lagonda 2.9-litre straight-six engine designed by W. O. Bentley, the DB Mk III is arguably the prettiest of the various evolutions of the DB2 launched in 1950.  It was this model that introduced the grille shape that has since graced virtually every Aston Martin.  It was also the first Aston Martin to gain the new instrument panel with dials in front of the driver that would be used in various forms throughout the evolution of the DB4, DB5 and DB6 models that followed.  The DB Mk III also benefitted from the rear hatchback first used on the DB2/4.  And finally, sadly not visible in this photo, this Aston sported the thin vertical rear lights (nicknamed ‘Cathedral’) from the 1955 Humber Hawk that were also seen to such elegant effect on the Park Ward Alvis cars and on the Bentley Continental from 1956. 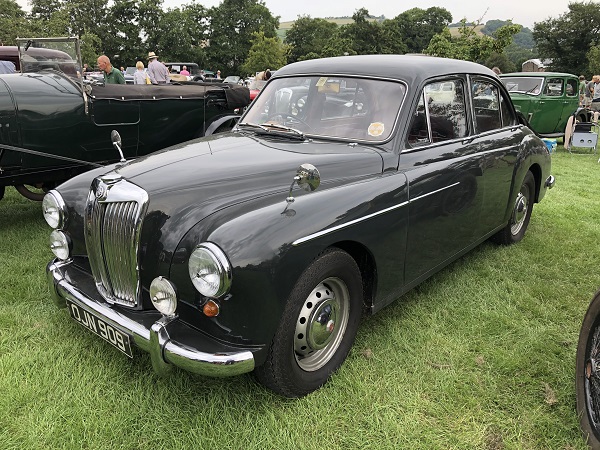 We are not expert enough to discern the difference between a ZA (1953 to 1956) and a ZB (1956 to 1958) but we know it’s not a Varitone; that version was an option on the ZB with two-tone paintwork and a larger wrap-around rear window, using a standard Pressed Steel body shell, the rear window opening being enlarged in the Morris Motors body shop, Cowley, before painting.  Altogether just over 36,000 of these Magnettes were built, split almost equally between the ZA and ZB – so it was a popular midsized sporty saloon. 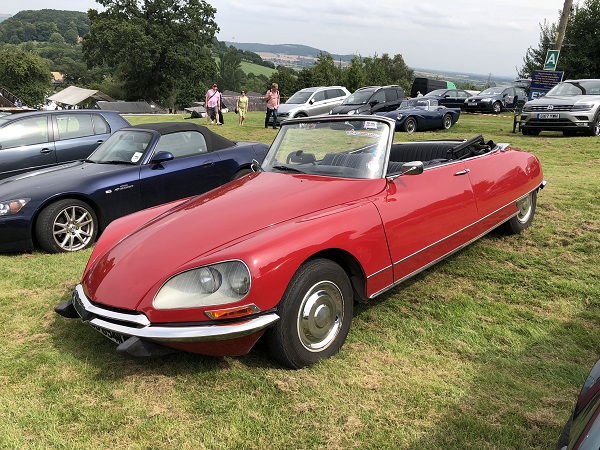 When we asked the owner of this beautiful machine whether it was a Chapron Décapotable he answered very honestly: “Sort of.”  He very kindly responded to our interest by emailing us some of its fascinating history – and we give here an extract from his reply.

He saw his first Décapotable in 1972 and immediately wanted one but never thought he would own one.  But in 1978 he did buy a saloon: a 1974 DS23efi Pallas.  Then in 1982 he found an old Décap in Radlett in Hertfordshire – a 1963 Chapron-bodied car and reputedly one of the first RHD cars in the UK.  The chassis had turned banana-shaped with rust and there were various bits missing; it was really beyond restoration as a complete car.  He bought it for £300.

He then had the Chapron body put onto the chassis of his DS23 and acquired two genuine Chapron doors (7 inches longer than saloon front doors which meant having new window glass made).  He then gradually acquired more Décap bits: rear indicators at £600 a pair in 1990, correct Lucas rear-light lenses to replace Dyane ones that were all he originally had, and various bits of chrome unique to the Chapron Décapotable cars.

In the late 90s he decided to have the car rebuilt properly.  This took about 7 years, including the superb respray in red that you see here.

Consistently with the owner’s instant admission to us of the truth, he confirmed that he has never pretended that the car is a genuine Décapotable.  For one thing, it is built on a saloon not a special Décapotable chassis (which was similar to that of the estate).  And of course it has the later 1974 twin-headlamp front end – there are believed to be only one or two genuine RHD cars of 1974 vintage.

The wonderful thing about this lovely car is that it looks like quite a few convertible DS examples – because you can now get conversions with reproduction bodies.  But this is a genuine hybrid with a 1974 front and a 1963 Chapron rear.

Finally, to quote its enthusiastic owner: “It is a delight to drive, a little faster than the original (which had the 1911 cc engine) and I have taken it to the DS 50th anniversary in Paris in 2005, to Rétrofolies in Spa in 2014, several times to the Circuit des Remparts at Angoulême and the Citroën Centenary meeting at Coventry last June.”

That is the proper way to use a proper car.  Our thanks are due to the owner for his permission to tell its story. 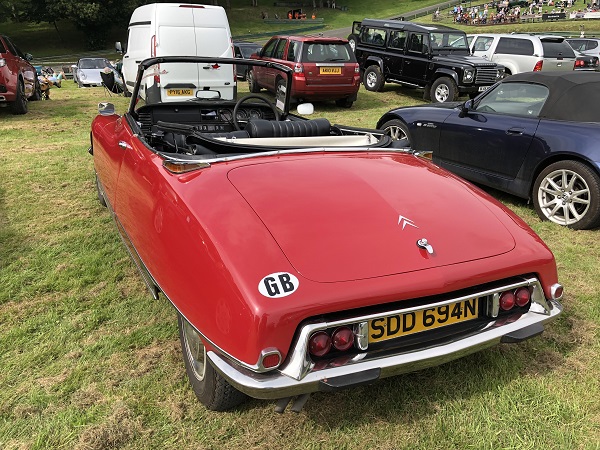 A close-up of the genuine indicators; £600 was probably a bargain 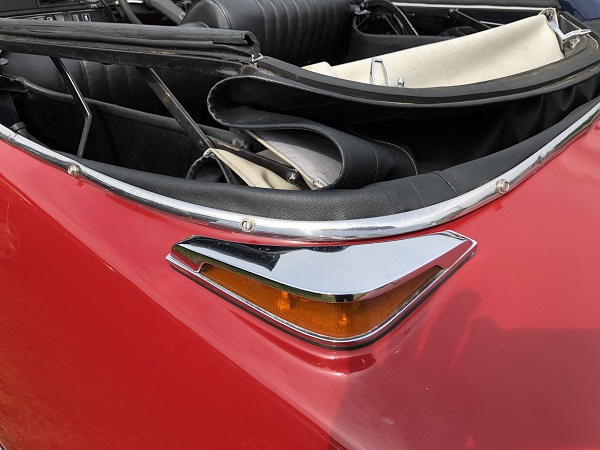 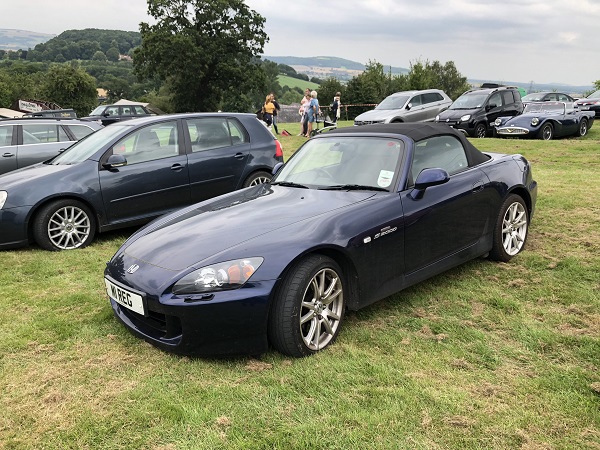 The Honda S2000 has from its launch in 1999 to its final year in 2009 always been a special car with undoubted pedigree.  It has always been a convertible and is noted for its exceptionally high specific output for a naturally aspirated production car: 124 bhp per litre.  The compact engine is mounted entirely behind the front axle, giving the S2000 a 50:50 front/rear weight distribution.  An aluminium hardtop was available from 2001.  The owner of this one was full of praise for it: great fun and total reliability. 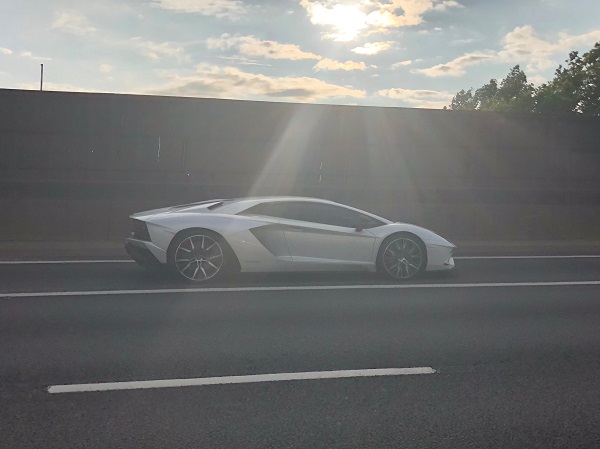 Naturally we couldn’t stop the driver of this space-age machine (seen on our way home) and ask him what year it was made – but we trust that it neatly rounds off our three reports from VSCC Prescott 2019.  At the end of two wonderful days the sun was setting on a great experience.

Do try to make it to VSCC Prescott in August 2020.  We shall be there!