END_OF_DOCUMENT_TOKEN_TO_BE_REPLACED

SNAPSHOT 114: Back on the estate 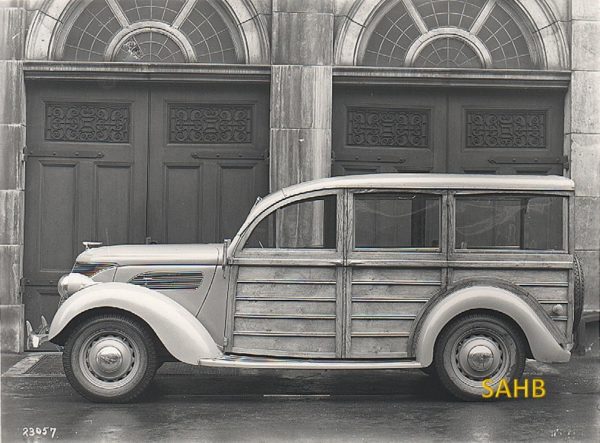 The 1936 Ford V-8 ‘Brakenvan’, seen here on 14 January 1937 at motor dealer Kevill-Davies & March Ltd. in London, is significant for what it doesn’t show: its inner secrets will be revealed in a moment. The idea for a combined shooting brake and van came from someone familiar with running a great sporting estate. Frederick Charles Gordon-Lennox (1904-89), Earl of March, succeeded as 9th Duke of Richmond & Gordon in May 1935. His engineering and motor racing interests were already well established but he also had a good eye for motor body design and for business opportunities. He was part of Kevill-Davies & March Ltd., Lancia and later Lagonda agents founded in 1929 at 9 Bruton Street, London W.1. Lord March was the Chairman, Hugh Somerset Kevill-Davies (1891-1956) the managing director, G. F. Earle a director, and Cedric Arthur Edwards became a manager after 1934. By the mid 1930s they had moved to showrooms at 28 Berkeley Street in Mayfair.

Lord March’s sporting designs were fitted to the Wolseley Hornet in particular and a few other sporting chassis. From around 1934 the firm promoted their estate car conversion, the ‘Brakenvan’, on old Rolls-Royce, W. O. Bentley, and other chassis. By the late 1930s they were offering ‘Brakenvan’ coachwork on new chassis such as the Ford V-8, Commer, Ford Prefect 10 h.p. model E93A, Dodge, and others. The Ford V-8 shown here reflects Lord March’s sense of style in the generous curve of the front doors and over the windscreen, reflecting the identical arc of the grille and side air vents.

The secret within was three rows of seats, with the rear two rows able to fold down completely flush to form a continuous loading floor aligned with the flat fold-down tailgate (to use modern parlance), even on the smaller chassis. The tailgate was useful for picnics, or watching sporting events. The Ford Motor Co.’s own ‘Utility Commercial Car’ had fixed seats. In 1947 motor dealer Harold Radford requested a patent for an identical system to the ‘Brakenvan’, granted in 1949, to be used in his Bentley ‘Countryman’ saloons built by Seary & McReady. It seems Kevill-Davies & March did not patent their seating system but might have had limited protection from a Design Registration. Who built the bodies for Kevill-Davies & March isn’t known but it was Radford who benefited most from their idea. Also in 1947 but now at 41-42 Hays Mews, Berkeley Square, Kevill-Davies & March had a new Alvis ‘Brakenvan’ built, clearly intending to retain their prewar offering but this time with just two rows of seats.

At least two ‘Brakenvan’ survivors are known, a Ford Prefect and 20 h.p. Rolls-Royce GKM14. The ‘Brakenvan’ name lives on in the fleet of modern ‘woodie’ golf buggies now used at the Duke’s Goodwood estate.

A more detailed version of this Snapshot, with more images, appears in the latest Summer issue of the SAHB Times – available to members.