END_OF_DOCUMENT_TOKEN_TO_BE_REPLACED

Silver Arrows: Mercedes-Benz Racing Cars of the 1950s – at the Louwman Museum in the Hague 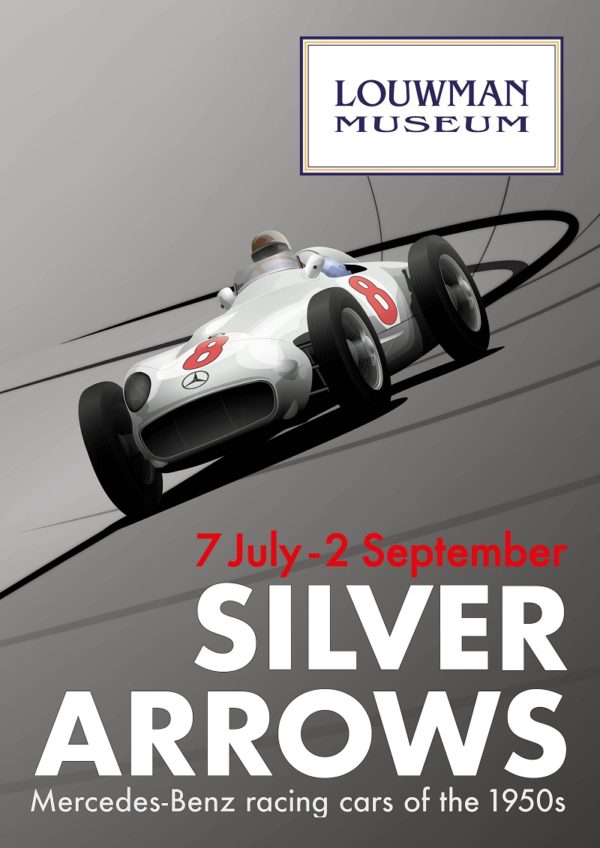 From 7 July to 2 September this year the Louwman Museum is hosting an exhibition of the legendary Silver Arrows Mercedes-Benz racing cars from the 1950s.  In close cooperation with Mercedes-Benz Classic in Stuttgart, Germany, they will be showing seven unique cars that represent one of the most heroic periods in the history of motor racing.

All the cars have earned their place in the motor racing history books. For example, the No. 8 W196R featured in our main picture was the car in which reigning Formula One World Champion Juan Manuel Fangio won the 1955 Dutch Grand Prix at Zandvoort, finishing just 0.3 seconds ahead of his teammate Stirling Moss. This was just one month after Moss’s and Fangio’s legendary one-two victory with the 300 SLR racing sports car in the gruelling Mille Miglia. On display in The Hague is Fangio’s Mille Miglia car, number 658.  Film footage will be shown to illustrate these epic races.

Also on display will be the 300 SLR ‘Uhlenhaut-Coupé’. This version of the 300 SLR (W196S) never actually took part in an official race, but it is regarded as the first supercar of the era: a two-seater thoroughbred racing car featuring a roof and gull-wing doors. Based on the extremely successful W196R Formula One car, it had a top speed of almost 300 km/h (187 mph).

The exhibition includes Formula One cars and sports cars that won not only Grand Prix events, but also long-distance races such as the Mille Miglia and the Targa Florio within the sports car championship. The link between racing and series production is demonstrated by two 300SL “Gullwing” exhibits: the W194 racing car from 1952 and the W198 production car derived from it.  All of the cars have an extensive racing history, involving such famous racing drivers as Juan Manuel Fangio, Stirling Moss, Karl Kling and Hans Herrmann.

The permanent collection of the museum is open to the public during the exhibition. The museum presents every aspect of the history of the automobile and cars from all eras. Over 250 motor cars produced by more than 100 different manufacturers provide an overview of the wide variety of coachwork and numerous technological developments, particularly from the last century. The extensive collection of automotive art, including posters, sculptures, trophies and paintings, puts the automobile into an historical perspective.

And don’t forget another set of dates for your diary…

Also at the Louwman Museum, the second Second European Conference for Automotive History will be organised jointly by:
The Society of Automotive Historians In Britain;
Automobil-Historische Gesellschaft e.V., Germany; and
Contactgroep Automobiel- en Motorrijwielhistorie, The Netherlands on

Following the highly successful first conference in 2017 in Mulhouse, this important second event is supported and hosted by the Louwman Museum.  We’ll be giving more details nearer the time, but put the dates in your diary!

… we hope you enjoy the gallery below, of the cars (and transporter!) that will be there.