END_OF_DOCUMENT_TOKEN_TO_BE_REPLACED

A vintage Sunbeam – as commuter car! 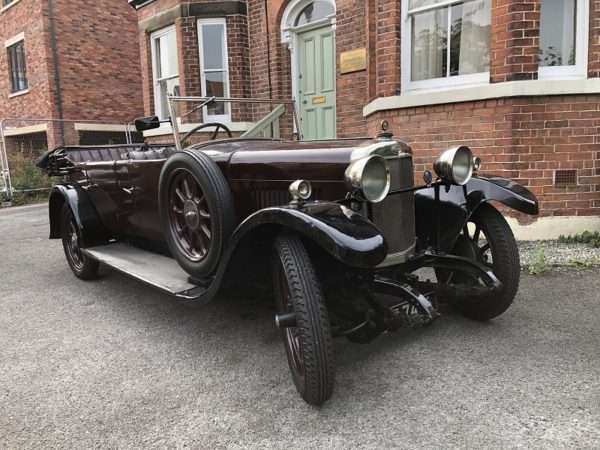 We know that we’ve been talking rather a lot about Sunbeams recently – but we couldn’t resist this one.  We saw this on 25 July as the owner arrived for work in it.  He had only just bought it the previous Thursday, and was already delighted with it.

It is clearly a reliable means of daily transport, because we’ve seen it outside the owner’s office twice since – always with the hood down, and once with its tonneau up, as the glorious recent weather returned to the normal mix of sun and showers.

It is a 1927 Sunbeam 16.9.  These high-quality cars were built at Sunbeam’s Wolverhampton factory from 1926 to at least 1930.  This new design was powered by a 2,035 cc six-cylinder overhead valve engine with integral cast iron block and crankcase. It was one of the most successful of Sunbeam’s volume models during this period.

As to this particular car, its owner tells us that it was probably part of the famous Sword Collection.  John Cuthill Sword, born in Airdrie in 1892, was a wealthy businessman in the West of Scotland who built up a transport empire of buses and planes.  Sword amassed an outstanding collection of veteran and vintage cars, including Sunbeams.  He died in 1960 and part of the car collection was put up for auction in 1962.

We cannot be sure that this is one of the Sword cars – but the registration is definitely a Scottish one.  What is certain is the quality of this wonderfully genuine car, quite possibly with its original upholstery.  We hope you enjoy these pictures as much as the owner clearly enjoys using his car for at least some of his daily commuting.