END_OF_DOCUMENT_TOKEN_TO_BE_REPLACED

Thrills, Spills and Automobiles – the story of a passion 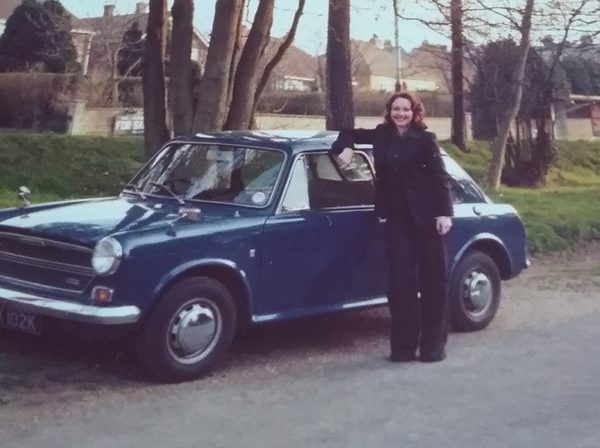 Sarah Crofts is a Museum Guide at the National Motor Museum in Beaulieu, and gave a fascinating talk at the SAHB Spring Seminar in March on Women in Motor Sport – and then joined the SAHB soon after.  But that, fortunately, was not enough for Sarah.  She has already become a regular active contributor (which we always want to see), and has sent us the following illustrated article that we think you’ll enjoy.  Read on…

“Sitting astride our gardener’s motorbike, my skinny little legs didn’t quite manage to meet the pedals.  No matter!  For a few glorious thrilling moments and gripping the handlebars as if my life depended on it, I was ‘King of the road’ as I was wheeled slowly around our front lawn…

“From then on I viewed my shiny red and blue tricycle with renewed interest; always willing it to go faster!

“Was this the start of my passion?  I have no doubt that it can all be traced back to an idyllic childhood with my earliest recollections inextricably linked to cars and much ‘motoring talk’ between my parents and their many friends.  Naturally, at this tender age I was not paying much attention but looking back, I have no doubt that it set the wheels in motion, so to speak

“I remember vividly the thrill of go karting and watching in absorbed fascination as my cousins and elder sister took turns racing around my aunt’s farm – tyres screeching on gravel and being enveloped in clouds of smoke.  ‘Why can’t I drive it’? I moaned to my mother.  ‘Because you are the youngest and the smallest,’ came the reply.  I am glad to say that things brightened up considerably when Julian, fourteen years old and ‘cool’ in his oil-stained jeans and mop of dark curly hair, came to my rescue…!

“Skinners of Hastings was purchased in 1913 by my late Grandfather, Frank Hickman, along with his brother John, from a Thomas and Jeremiah Skinner.  Skinners were renowned coachbuilders together with a saddlery and large number of horses that had been bought from a local farm near the village of Crowhurst.  During WW1 most of them were sold to the army.

One of the original Skinners motor buses 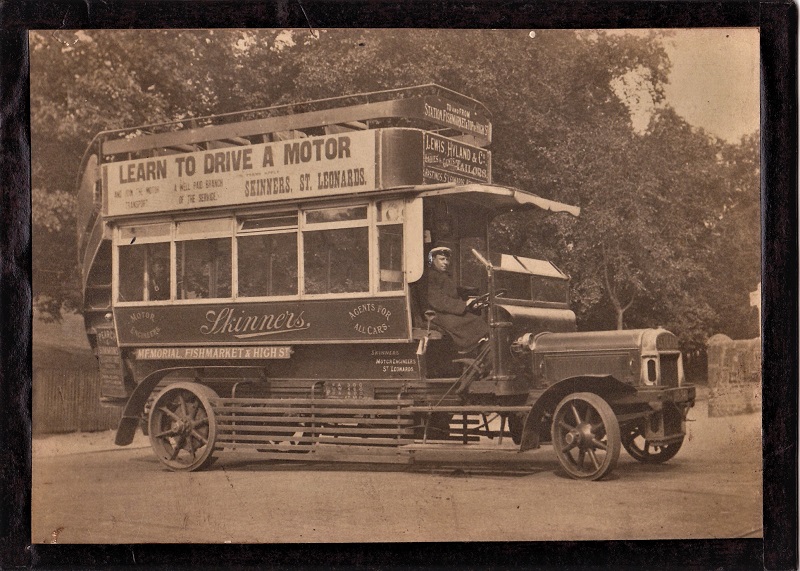 “My Father, Michael Frank was born in 1915 and following private education at Westerley School for Boys and Eastbourne College he served as an Officer in the Army during World War II.  Following the war he went on to complete an apprenticeship with the Austin Motor Car Company, donning overalls and working on the factory floor.  My Grandfather had enjoyed a good business relationship with Herbert Austin; frequently visiting the factory.

My Grandfather, Frank Hickman on the occasion of his 86th Birthday with my older sister Angela and myself 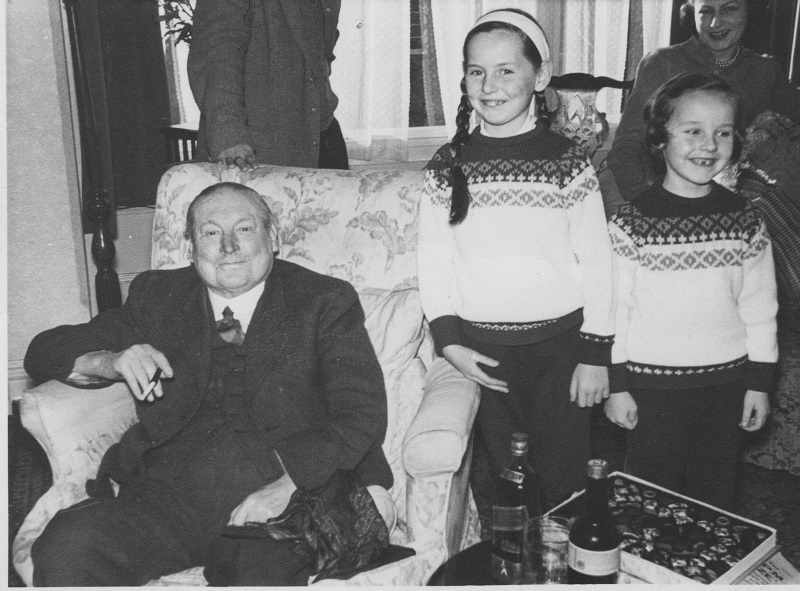 “My father, upon completing his apprenticeship, joined the family business, now Skinners Motor Dealers of Hastings, eventually becoming Chairman.  He was also a member of the Worshipful Company of Coachmakers and Coach Harness Makers, which was founded in 1677 – one of the Livery Companies of the City of London.  He was known as ‘Mr Michael’ amongst his loyal and dedicated staff – who stayed with Skinners for many years.

Skinners entry in the “Car and Lady” Concours d’Elegance 1955, with my mother and her Austin Nippy 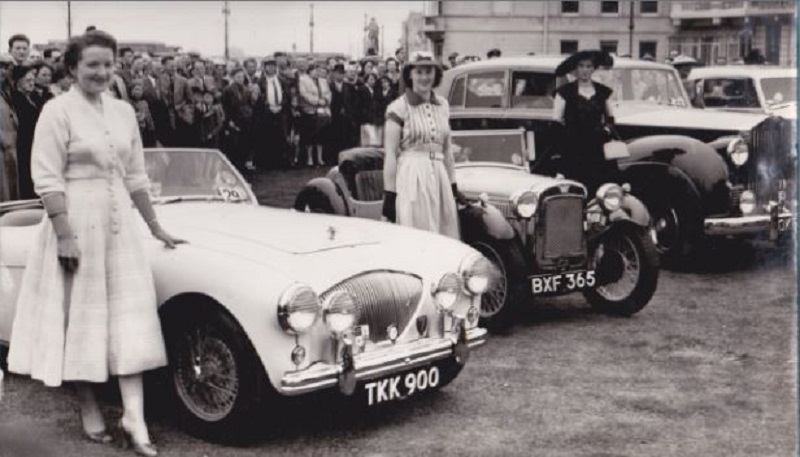 “My father was a founder member of the Hastings Car Club, often providing marshals for the RAC Rally when it finished in Hastings.  My parents met Pat Moss on several occasions when she first appeared on the rally scene and were amused by her infectious sense of humour but also by the fact that once behind the wheel how competitive she was, and a true match for the men.

“As well as the Hastings Car Club, my father helped organise the annual Bodiam Hill Climb – held in October following the hop picking.  My mother Jean was a regular competitor driving her Austin Nippy.

My father is standing with the microphone at the start with my mother seated in a Morgan.  Bodiam Hill Climb, East Sussex 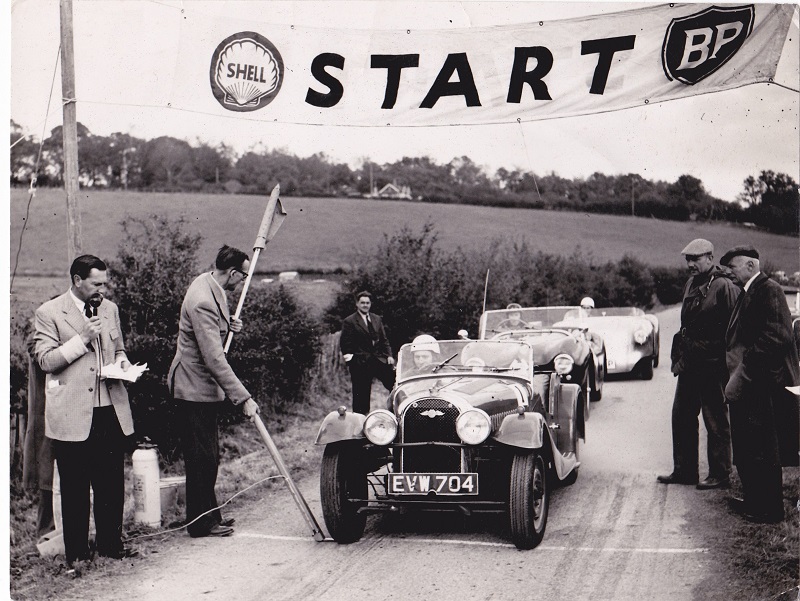 Hastings seafront with my mother in her Austin Nippy during car trials for the Hastings Carnival, late 1950s 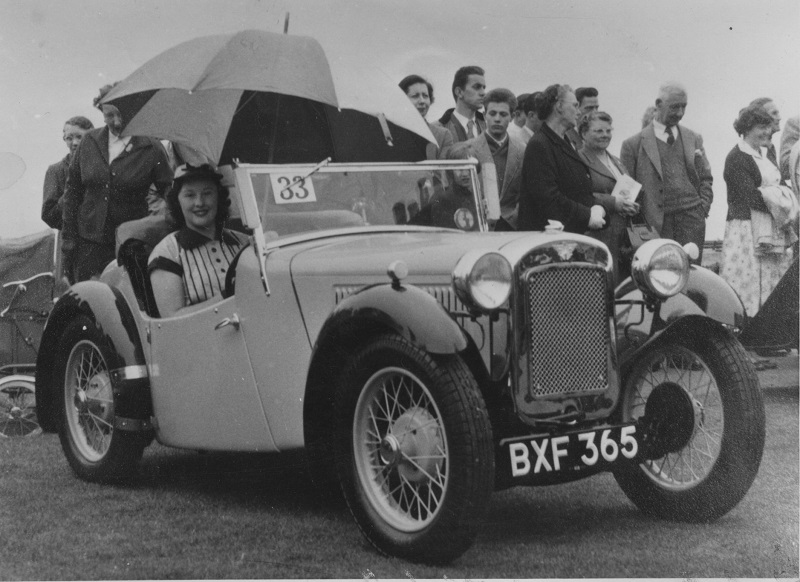 “During the 1960s Bodiam Castle was one of our favourite venues for a day out; it certainly was a fantastic place to explore with breathtaking views across the Weald of Sussex and Kent.  My father used to point out that the Castle car park was turned into  the ‘pits’ for that particular event.

“The wealthy amateur racing driver, Philip Fotheringham-Parker who had been an associate of Duncan Hamilton was a close friend of both my parents and grandparents.  Philip, along with his wife Georgie who competed in rallies with my mother, often attended the many parties my parents would host.  I remember vividly my sister and I squeezing between elbows and raised glasses as we balanced silver trays of canapes; often with a friendly nod from the men and smiles from the ladies, as they sparkled and shimmered in their cocktail dresses.  My mother had in fact been invited by Georgie to join the Ladies Rally Team for the Monte Carlo but she gracefully declined, replying that she could not leave her two little girls!

Park  Lane Hotel, BRDC Dinner: my parents are standing to the left with Philip Fotheringham Parker and his wife Georgie to the right 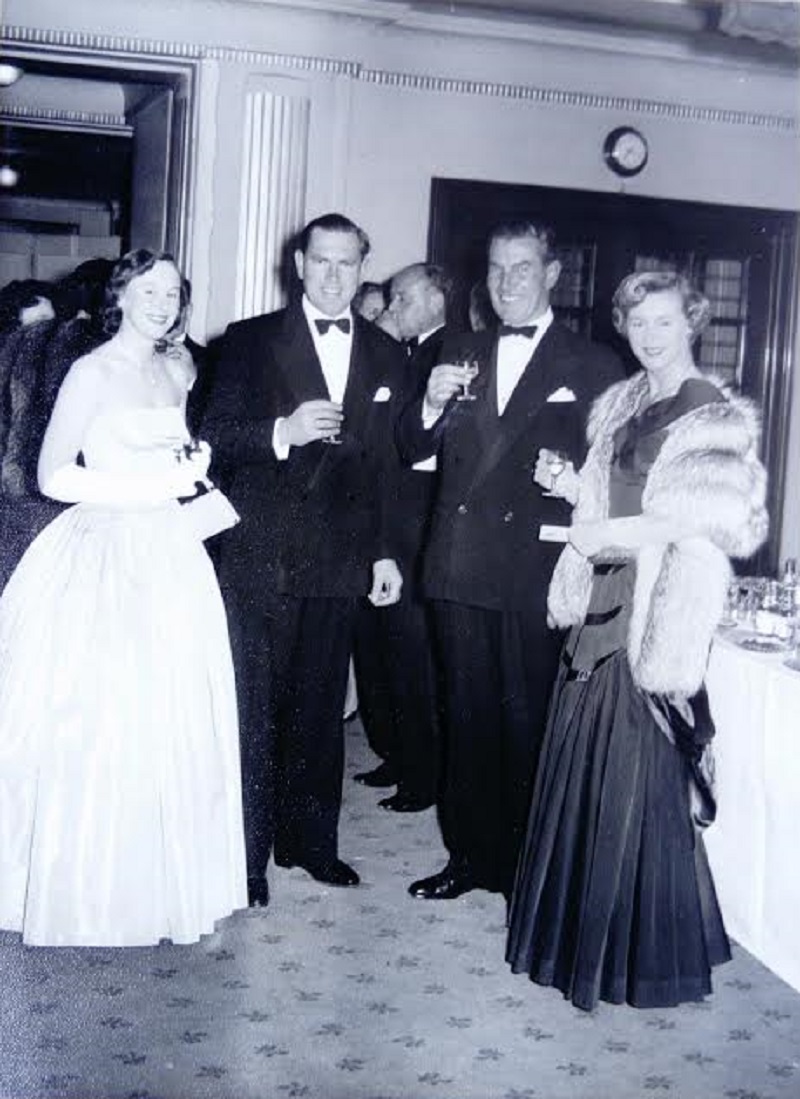 “I remember with a special fondness the many hours my father would sit beside me as I experienced my driving lessons in an Austin 1100.  These ‘challenges’ tended to be early on Sunday mornings around Hastings with its many hills!  I will never forget my father’s obvious relief when I at last understood the necessity of clutch control and my beaming smile when I passed my test first time on a particularly cold, wet and windy day in March 1975. 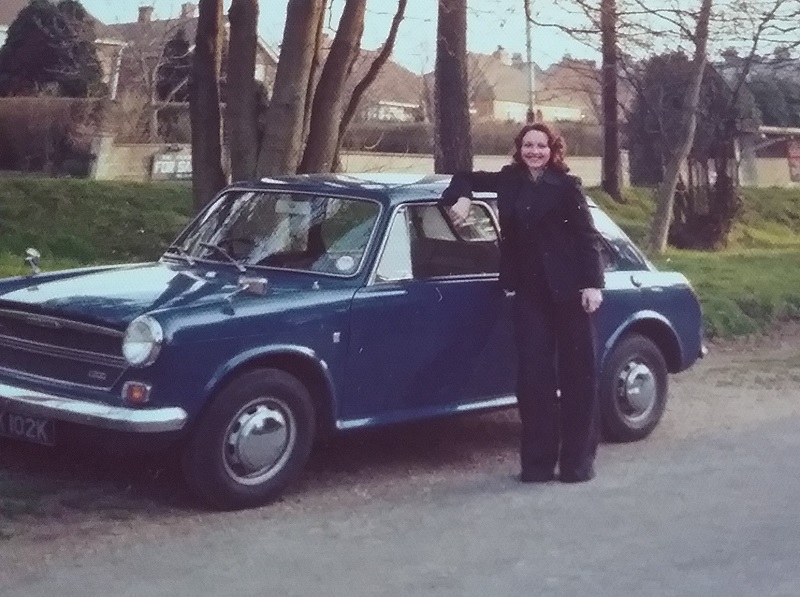 “Little did I think that many years later I would be driving a Porsche Cayman around the Thruxton Circuit.  I loved every exhilarating minute and, despite a brief momentary lapse of concentration around a chicane, I was congratulated on my handling of the car during the debriefing!  I now know exactly how the Hon Mrs Victor Bruce felt in 1974 when she unleashed a Ford Ghia, also at Thruxton and touched 110mph.  She was 78 years young!  Surely this just proves that age is no barrier for challenges such as this? 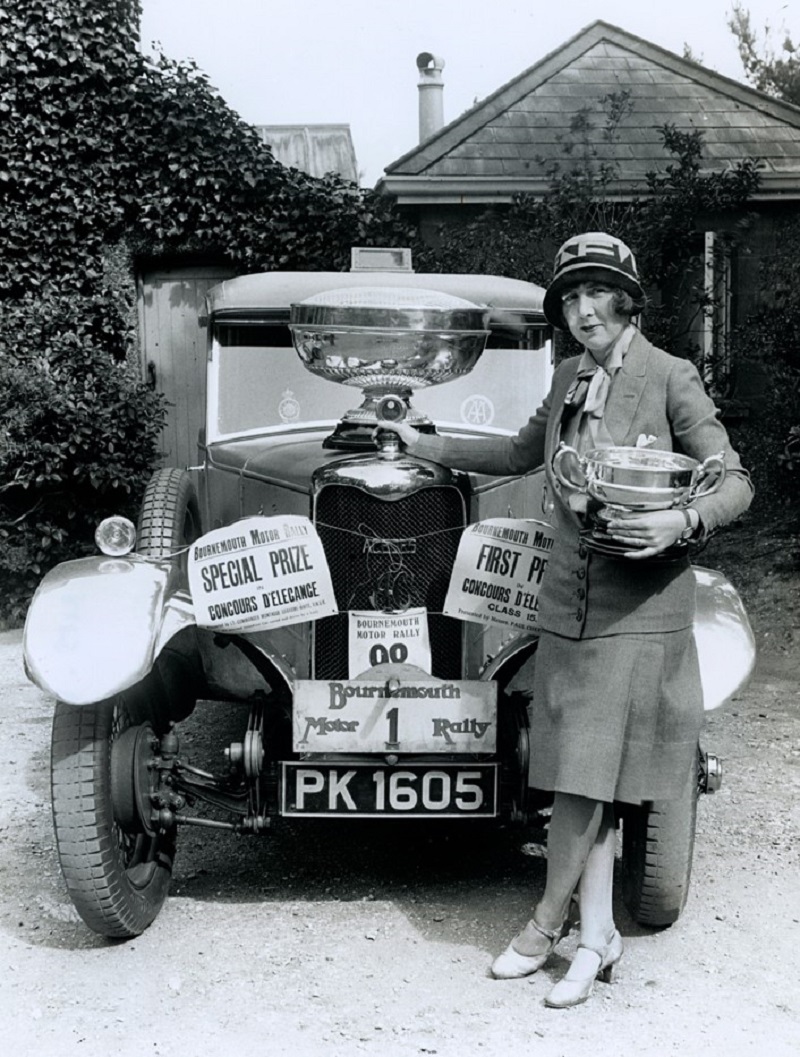 “The following year I enjoyed another ‘Adrenalin Rush’ when, for several minutes, I took the controls of a Piper Warrior light aircraft, flying from Bournemouth International Airport to the Isle of Wight.  Memorable? Yes. Exhilarating?  Definitely.  Slight Apprehension?  Of course, but so glad I did it!

“We all have something or someone to aspire to, as well as major influences in our life.  This may be family, friends, our work; which is all part of life’s rich pattern, encouraging us to succeed and to never stop learning and which, in my case, is the sometimes controversial subject of women in motor sport and social history.

“I like to think that there may be a little of the Hon Mrs Victor Bruce in me and if I ever get the chance to lap a racing circuit at 100 mph in my seventies – even eighties – there will be no stopping me!”

3 responses to “Thrills, Spills and Automobiles – the story of a passion”