END_OF_DOCUMENT_TOKEN_TO_BE_REPLACED

By the time of the demise of Bristol Cars in 2011, the Blenheim was considered to be rather out of date, containing as it did many chassis features that essentially dated back to the founding of the car company in 1946.  It is thus perhaps forgotten how beautifully designed and built the early cars were.  This Technical Talk brings to light some of the features that were celebrated early in 1950, when the 400 (1946-1950) and 401 (1948-1953) were in production together.  The key differences between the two chassis were few: the 400 had the 85A engine developing 80 bhp with three SU carburettors, and the 401 had the 85C engine developing 85 bhp with three Solex units.  The 401 had a rearward extension of the frame, to carry longer bodywork; it also included the front bulkhead structure in its frame.  The two most unusual features of the cars – the engine and the rear suspension – were derived from pre-war BMW cars designed by Fritz Fiedler. The engine was a development of the innovative M328 engine from the 1936 328 sports car, and the torsion bar rear suspension was first seen in the 1936 326 four-door saloon.  All the pictures and drawings here relate to the 401.

The history of the Bristol 2-litre engine started in 1935 when BMW decided to build a car which could compete against more powerful rivals in international racing.  But the company lacked the financial resources to develop a completely new sports racer for the two-litre class. The existing 319/1 roadster therefore formed the basis for the new car.  The 319 engine, a six-cylinder pushrod overhead-valve unit designed by Rudolf Schleicher was bored out by a millimetre to give a capacity of 1971 cc.  But BMW knew that the necessary performance required hemispherical combustion chambers and overhead valves in a V formation.  Once again, there was not enough money for the development of a true twin-overhead camshaft engine.  Thus was born a remarkable and controversial solution that some engineers thought totally unworkable but that vindicated its design through its racing success.  The single camshaft low in the block, and its associated pushrods, remained.  Inlet and exhaust valves were operated by rockers, the exhaust rockers being operated by intermediate transverse pushrods controlled from rockers on the inlet valve rocker shaft.  It is this solution that was taken up by Bristol in 1946 and developed through to its final incarnation in the 2.2-litre Bristol 406 of 1958.

Figure 1 shows the arrangement of the operating pushrods and rockers of the engine – for the inlet in red and for the exhaust in blue.  The initial exhaust pushrod from camshaft to inlet rocker shaft is hidden behind the vertical red inlet pushrod.  A particular advantage of this layout lay in the positioning of the inlet tracts inside the V, again seen in Figure 1.  This gave an unusually free passage between the carburettors and the inlet valves, at the expense of a rather tall engine. 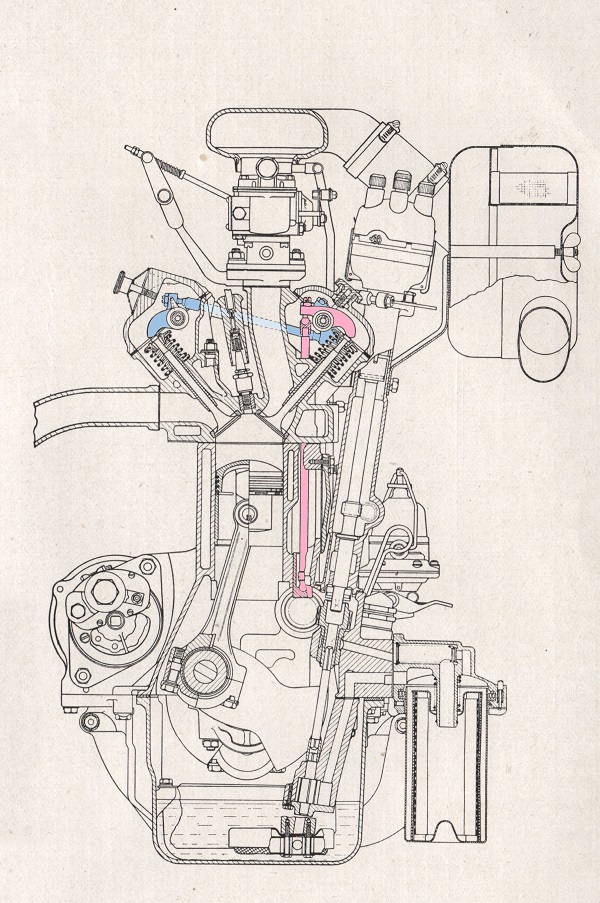 Figure 1.  The pushrod arrangement for inlet and exhaust valve operation and the vertical inlet tract from carburettor to inlet valve.

Figure 2 shows how each of the three inlet tracts divides into two branches feeding the ports. 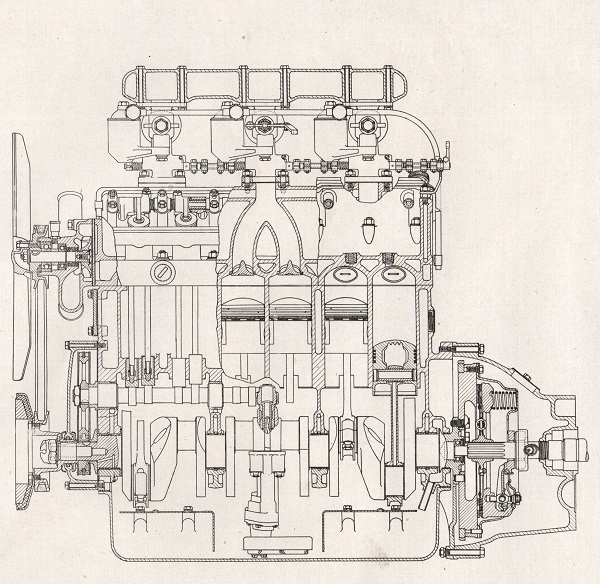 Figure 2.  The division of the inlet tracts into two branches for each pair of cylinders.

There was no separate inlet manifold in the ordinary sense, since the three inlet tracts were integrally cast into the aluminium alloy cylinder head (made from RR.50 Hiduminium) as also were the rocker boxes, as shown in Figure 3. 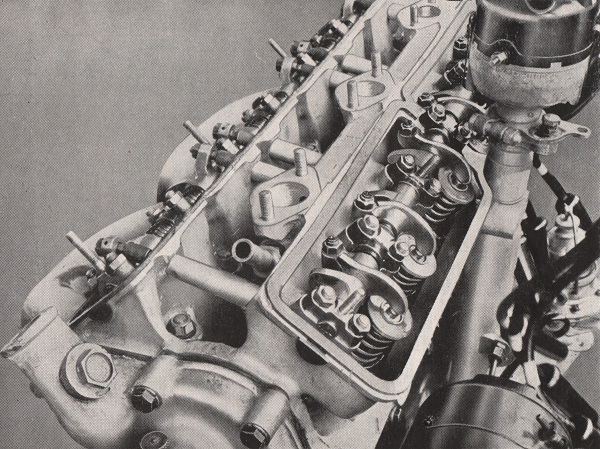 Figure 3. Cylinder head (inlet side on the right), showing the tubes for the transverse exhaust pushrods and the integrally cast inlet tracts.

The rear springs were in the form of two torsion bars with their axes parallel to the longitudinal axis of the car.  The forward ends of the torsion bars were anchored to the tubular cross-member that supported the rear end of the gearbox, about mid-way in the chassis and just behind the steering wheel.  Figure 4 shows the front anchorage of the nearside torsion bar.  Its splined end was located in an internally splined housing secured to a bracket by four bolts. 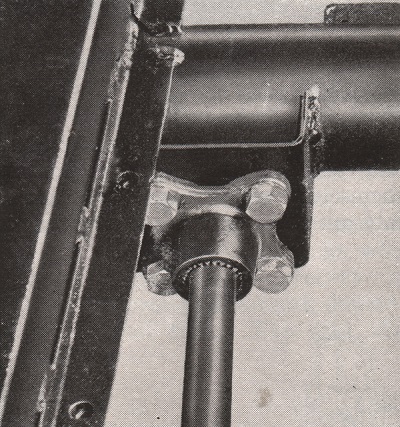 Figure 4. Front anchorage of the torsion bar, on the tubular cross-member.

The splined rear ends of the torsion bars located in the suspension levers.  Short links connected these levers to the axle casting.  An A bracket was pivoted from the top of the rear frame cross-member and attached with a ball joint to the differential housing, thus providing lateral location for the rear axle.  Figure 5 shows the torsion bars, suspension levers and links (the nearside ones shaded in green), and the A bracket.  Figure 6 shows a photographic view of the same arrangement. 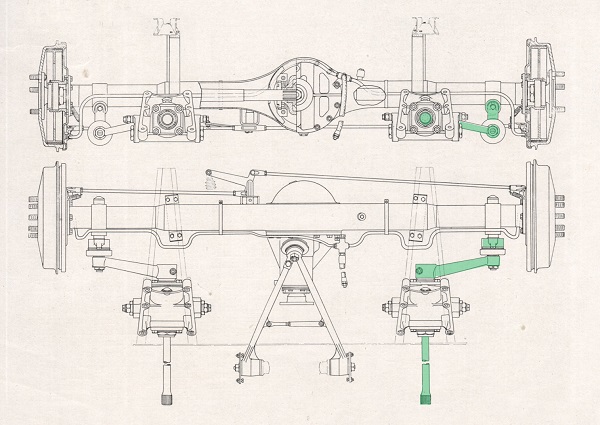 Figure 5.  The torsion bars, suspension levers and links to the rear axle casting, and the axle location by A bracket. 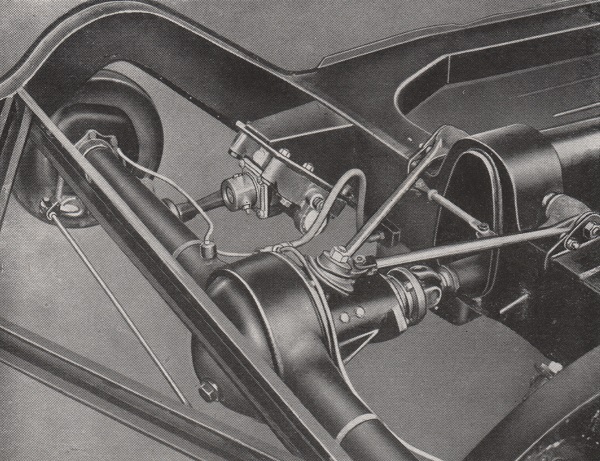