END_OF_DOCUMENT_TOKEN_TO_BE_REPLACED

TECHNICAL TALK 2: a clutch means so much 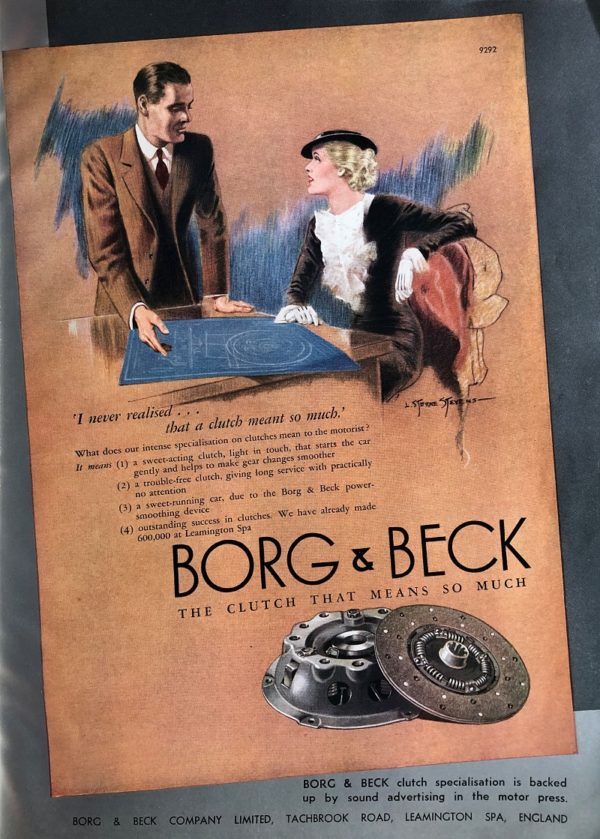 This is not overly technical – but we couldn’t resist the advertisement.  It appeared in the August 1937 issue of The Automobile Engineer.  It is most regrettable that the blueprint on the table cannot be seen in more detail; the gentleman from Borg & Beck is clearly explaining to the lady the technicalities of the Borg & Beck power-smoothing device mentioned in point 3, and she is clearly understanding how it leads to a sweet-running car.

We do however know something about the artist, thanks to SAHB member Tony Clark, via his Motoring Art website: www.motoringart.info.  Lawrence Sterne Stevens was an American artist, born in 1884, who worked in Europe and the UK and reached greater fame as an artist for ‘pulp’ fiction stories.  His fascinating story is told in www.pulpartists.com/stevens,l.html.  In the motoring context, Stevens worked from 1925 to 1937 as a designer and illustrator for the General Motors Company in Brussels and Antwerp – and on the evidence of our picture must also have done freelance work for Borg & Beck.  On the outbreak of World War II he moved to America, where his pulp fiction work started in 1941.  He died in 1960.

Lawrence Stevens certainly had the ability to make an exceptional impact in his illustrations, whether they were of femmes fatales in mortal danger or of elegant English ladies wishing to learn more about the inner workings of the motor car.  Who said that technical things aren’t interesting?