END_OF_DOCUMENT_TOKEN_TO_BE_REPLACED

The Mirafiori factory in Turin was at one time the largest industrial complex in Italy. It is also one of the oldest motor car factories in Europe still in at least partial operation. It was opened in 1939 by Mussolini, in front of a restless crowd of workers, angry at rising food prices and fearful of the imminent outbreak of war. Its first product should have been the Fiat 700, but war intervened; full post-war production started in 1947 with the second series of the Fiat 500 B “Topolino” and the Fiat 1100 that had previously been built at Lingotto. In 1950 it was building over 400 cars a day; reorganisation was under way to increase this to more than 500 per day, spread over three models: 500, 1100 and the new 1400.

This Technical Talk is an extract from the report of a British engineer’s observations at the factory during 1950.

The factory was at the forefront of best practice in 1950; it was in effect three factories in one: a foundry, a forge and a car factory. There was excellent ventilation that kept an even temperature all year round, despite the hot summers and cold winters of Turin. Wide gangways at strategic points in the factory allowed delivery of materials to where they were needed, even by large trucks. Conveyors and overhead cranes were used throughout, supplemented by high-capacity high-lift fork-lift trucks that could move body-pressing tools weighing up to 7½ tons and insert them directly into presses. 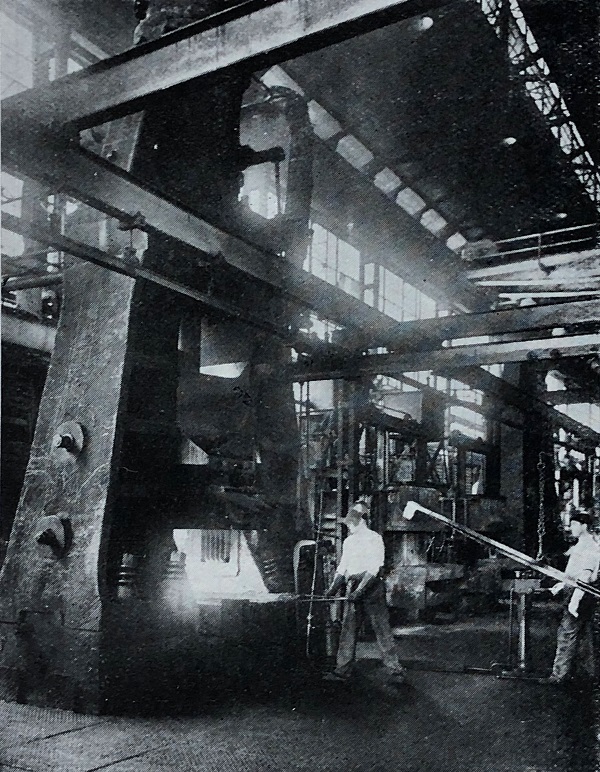 The dies for the press shop were machined on the latest American machines such as Giddings & Lewis die sinkers, to a very high standard of finish. Presses varied in size from 3 to 2,000 tons in capacity. An unusual method was used to prepare sheets for the roof panel pressings: two sheets were welded together in a custom-built flash welding machine. From there, they were taken to a pivoting table; first, the weld bead was removed from one side, then the sheet was rotated on the table and the other bead was removed. The properties of the metal at the welded joint were naturally affected, so a special rolling machine was used to restore the metal to its original condition.

This method enabled a complete roof panel to be produced from standard-sized sheets, thus greatly easing supply problems in the post-war period of steel shortages. The process was so successful that it was further used to weld together other pieces of metal to make other components. These smaller pieces would otherwise have been scrapped. 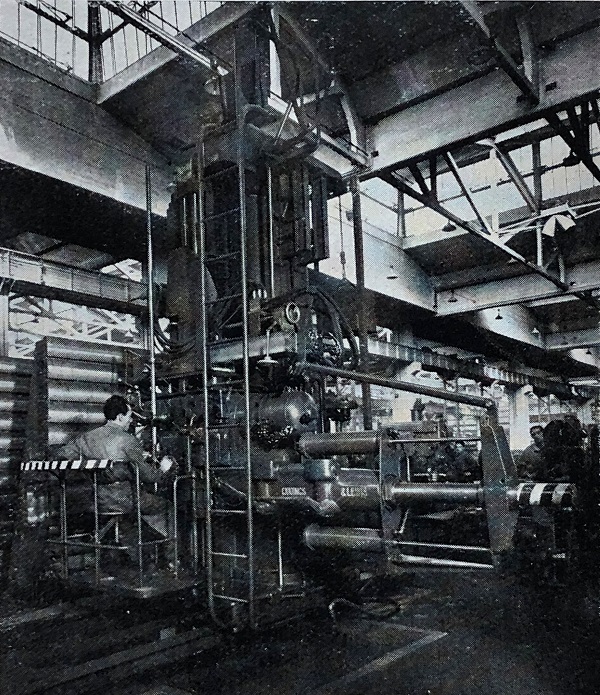 A large Giddings & Lewis diesinker in the die shop 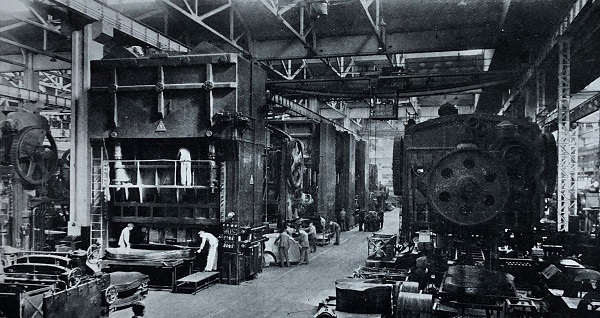 Panels from the press department were carried by overhead conveyors to the fixed welding machines in the body shop. Alongside conventional portable welding guns, Fiat developed their own electronically controlled spot-welders that could make many spot welds simultaneously. Sub-assemblies were then delivered to the body line, again by overhead conveyor.

Different procedures were used for different models of car. The latest model, the 1400, had an integral (monocoque) construction, while the other models had separate chassis. For the 1400, the equipment comprised jigs for the complete floor assembly, and conveyors to take the finished floors to the body-shell assembly jigs.  There were two body-shell jigs: while one welding gang was working on one jig the other gang was unloading and loading the second jig. Fiat engineers had put a great deal of careful work into designing the jigs to provide enough support for accurate positioning while allowing rapid unloading and loading. The jigs were thus remarkably open while producing very accurate results.

Practically all body welding was by portable welding guns, but oxy-acetylene was used for welding the door posts to the frames and roof panels. Standard time for loading, welding and unloading the body shell was only 13 minutes. Work was underway to install pneumatic clamping, to reduce this time even further. 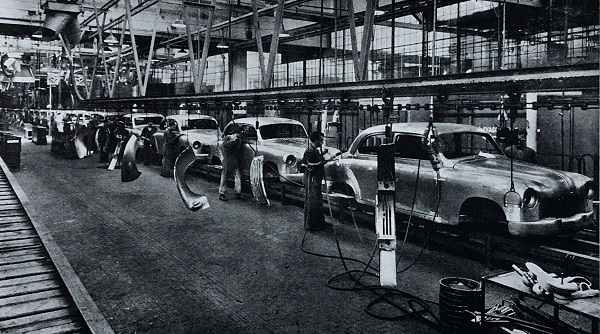 The finishing line for body assembly

Doors and wings were then supplied to the body line. Great attention was paid to smoothing down all parts of the bodies before painting. Standard time for complete body assembly was 29 man hours. 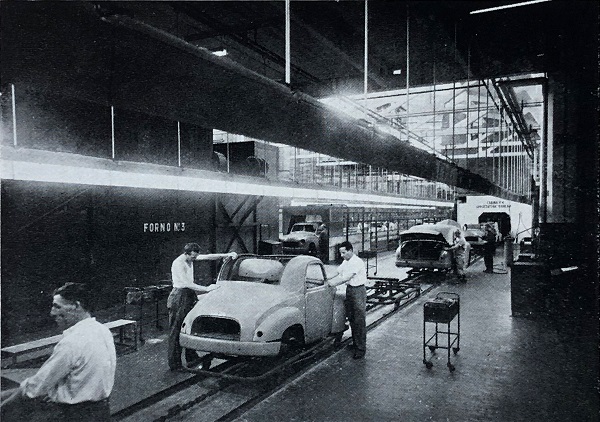 Rubbing-down section in the painting department

For painting, a normal non-metallic phosphate treatment was followed by painting in an air-conditioned and dust-free environment. Phosphating and painting took a standard time of 8.3 man hours par car. All bodies passing through the painting section in one day were painted in the same colour. 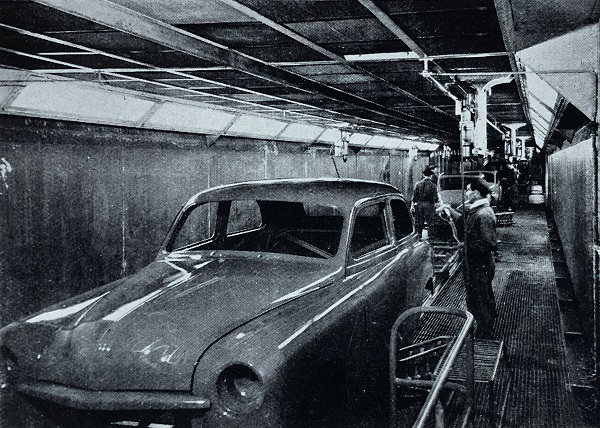 One of the paint spraying booths

The machines for production of the latest engine, for the 1400, were all modern American machine tools supplied under Marshall aid.

Different components used different methods for transferring them from machine to machine. Simple roller conveyors were used for cylinder blocks, while gravity conveyors transported flywheels. For crankshafts and camshafts, components were merely taken from a machine and placed on a carrier from which the next operator could pick it up with the minimum of movement. A complex system of overhead conveyors was used for transferring components to the centralised heat-treatment department, where gas carburising was extensively used – a process carried out in an atmosphere of carbon monoxide and methane. The gas dissociates catalytically at the hot steel surface to generate elemental carbon atoms. This carbon permeates into the steel lattice to form a carbon-enriched surface layer. This process was and still is often used for case-hardening of such components as crankshafts or camshafts, where the body of the component needs to remain flexible but the bearing surfaces have to be highly resistant to wear.

The number of machines in the flow production line for cylinder blocks was so great that it comprised three parallel lines with loops at each end to form the total process unit. For the first operation, the block was placed on a special-purpose Cincinnati miller with seven cutters that rough- and finish-machined the sump face, the joint face and the main bearing joint faces. Two accurate location holes were then drilled and reamed in the sump faces, for accurate location at all further operations.

Cincinnati millers machined the next faces on the ends and sides of the blocks, after which a 4-spindle Ingersoll machine rough bored the cylinders. Unusual Natco machines with two horizontal and one vertical head drilled necessary holes in the block, and more Natco machines drilled the valve-guide holes. The blocks were then thoroughly pressure-washed and hydraulically tested before radial-arm drills carried out drilling that could not be done on the automated lines. The blocks were pressure-washed again before the rough and finish machining of main bearings and camshaft holes. A six-station indexing table held three blocks at a time for machining of holes for pumps and ignition distributors, all totally automatic. Further machines carried out finish machining of bearing surfaces and cylinder bores, and light machining of sump and joint faces before insertion of pre-finished cylinder liners. Total machining time on the blocks was 42 minutes.

All three Fiat models used aluminium cylinder heads. Multi-spindle Ingersoll machines carried out several operations on different faces simultaneously. When head machining was complete, the heads were pressure-tested and heated to 250 degrees C to allow the valve seats to be inserted to give a shrink fit. Valve seats were then accurately machined to a concentricity tolerance of 0.001mm. 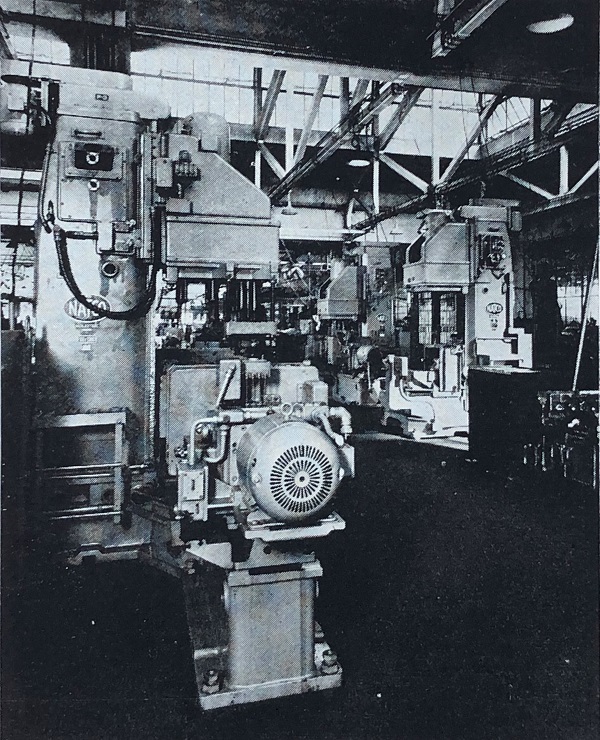 Part of the cylinder-head line

Fiat practice differed from English practice, in that two shafts were milled to length at one setting on a duplex milling machine. Subsequent processes were once again carried out on the latest American machine tools: a Sundstrand double-end centring machine was followed by a LeBlond line bearing machine (essentially a multi-tool lathe) for machining the main journals and all other diameters struck from the shaft axis. Eight diameters were machined simultaneously. The LeBlond not only gave a high rate of metal removal, but its limit switches ensured that the machine always stopped with the chuck in the correct position for loading, thus minimising loading and unloading times.

Shafts were then tested for straightness and passed to a Landis machine for rough-grinding of the journals. Another LeBlond machine, an automatic crankshaft lathe, machined the webs and crankpins. Another check on straightness was followed by boring of long oil holes on specialised machines. Various Landis machines then carried out the subsequent finish-grinding operations.

The crankshafts were then passed to a Dynetric balancing machine, after which a Norton machine gave all journals and pins a final surface finish of very high quality.

Engines were assembled on a chain conveyor. The process was entirely conventional, but the British observer noted three outstanding features of the line: a general air of neatness and cleanliness; neat and convenient arrangement of stock banks; and remarkable methods used to ensure absolute cleanliness of critical parts such as crankshafts and bearings. For example, thin-wall bearings were stocked in an oil bath in a covered container until needed, and crankshafts were pressure-washed, twice, immediately before assembly.

Engines moved by overhead conveyor to the test house. At the time, they were all tested for three hours, with recording of power outputs and fuel consumption at different speeds – but with the steady increase in volume it was likely that these lengthy and expensive tests would be reduced. 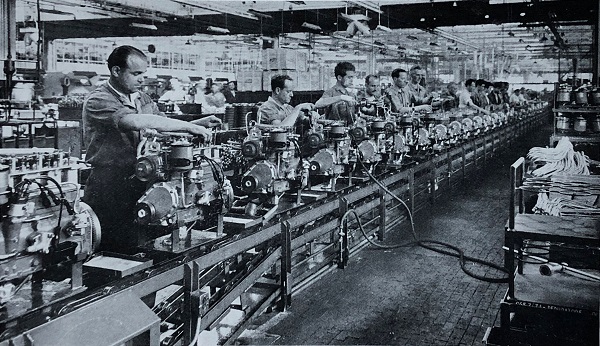 Engine assembly line for the 1400 model

Assembly of the cars

After engine testing, the engine, gearbox and clutch were assembled and then mated to front and rear axle assemblies. Conveyors took the whole transmission assembly under the conveyor that brought bodies from the body trimming department, and the bodies were dropped into position. Ten assembly stations followed, all sitting above the operators, where work under the cars fitted the silencers, brakes and electrical cables. Wheels and tyres were fitted, and the cars then dropped to ground level for final assembly to be carried out. The cars then ran for 50 kilometres on a test track that included rough surfaces, one of which was of course the obligatory pavé. 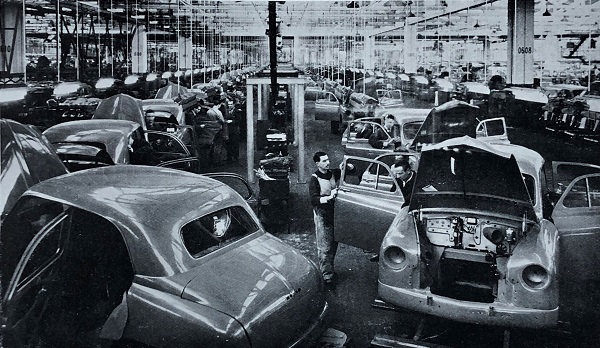 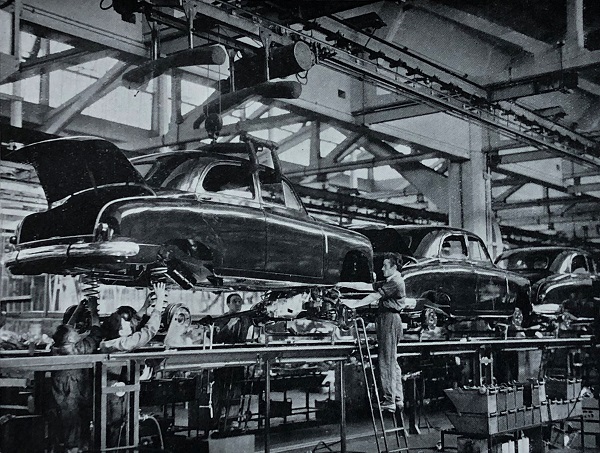 Assembling body to power and transmission units for the 1400 model 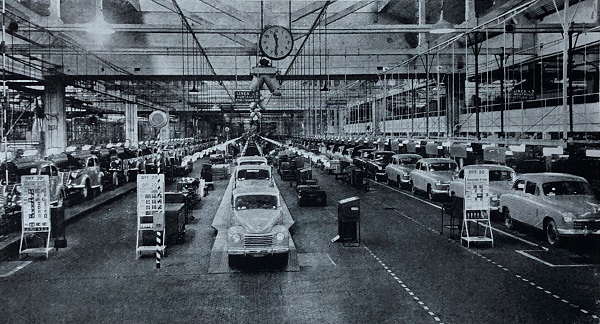 The reporting engineer made several final observations on the impressively modern and meticulous processes at the factory: