END_OF_DOCUMENT_TOKEN_TO_BE_REPLACED

SNAPSHOT 80: When English was Chic 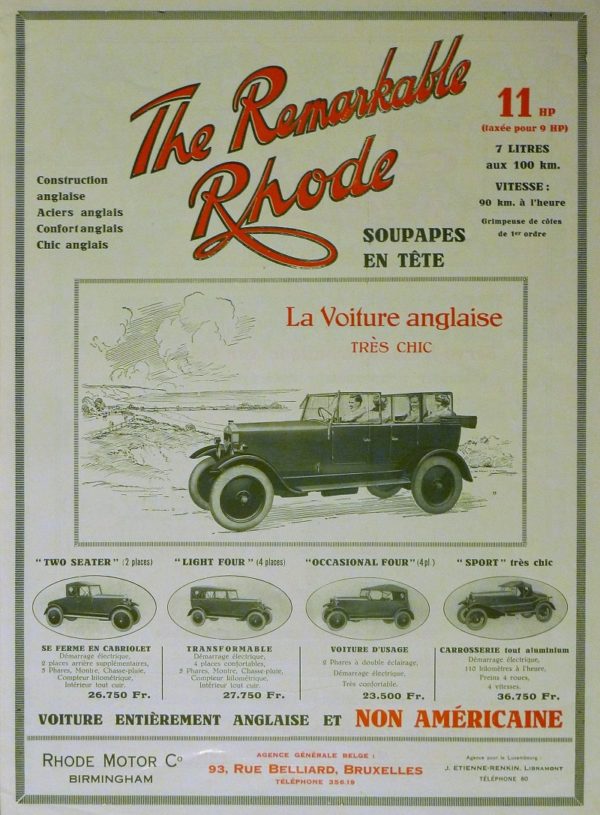 Despite recent decisions to distance ourselves a little more from our cousins on the other side of the English Channel, it’s probable that we would still consider the Continentals to be more ‘chic’ than us, the solid and rather dull ‘Rosbifs’.  Back in 1925, however, the Rhode Motor Co. of Birmingham definitely thought that its cars were worthy of that French adjective.

This advertisement, from the 1925 Motor Show edition of the Belgian publication La Revue Sportive Illustrée, doesn’t just vaunt the smart appearance of Rhode cars; it also promotes many other aspects of its English origins: English construction, English steel and English comfort.

After World War 2, when Belgium had lost virtually all of its home-grown makes, it was an open market for manufacturers from England, continental Europe and America.  But in 1925, this small Birmingham maker was up against fierce competition from many sides: this issue of the magazine included advertisements from Rochet-Schneider, Mathis, Citroën and S.A.R.A. from France, F.N., Impéria, Nagant, Excelsior and Minerva from Belgium and Studebaker, Oldsmobile, Willys and Chevrolet from the USA – to select only a few from each country out of a much longer list.

The Rhode Motor Company was founded by F. W. Mead and T. W. Deakin, already makers of bicycle and motorcycle components and Canoelet sidecars.  They started the manufacture of motor cars in 1921, using their own design of engine.  Unusually for a light car at this time, the engine, a four-cylinder of 1,087cc, had a single overhead cam – but the rear axle was less advanced, having no differential.

By the time of this advertisement, the Rhode sported a 1,232cc engine, a differential and a self-starter, and the “Sport” version had a claimed top speed of 110km/h (69mph).

In 1926 the single-ohc engine was replaced by a less sporting pushrod ohv engine, but the ohc engine returned in the Hawk model of 1928.

About 2,500 cars were made between 1921 and 1928, but the company declined from that time, was taken over and moved to smaller premises in Hall Green, with Meadows engines replacing the company’s own engines when stock ran out.  The company sadly lasted no longer than 1931.

But here in 1925, we can see a company full of confidence – not only in its English origins and its ohc engine, but also of the fact, proudly stated at the base of the page in red, that it was “NOT AMERICAN.”  Perhaps this says something about the Belgian public’s attitude to the invasion of United States competition at this time.

One response to “SNAPSHOT 80: When English was Chic”