END_OF_DOCUMENT_TOKEN_TO_BE_REPLACED

SNAPSHOT 68: ‘On the right tracks’ 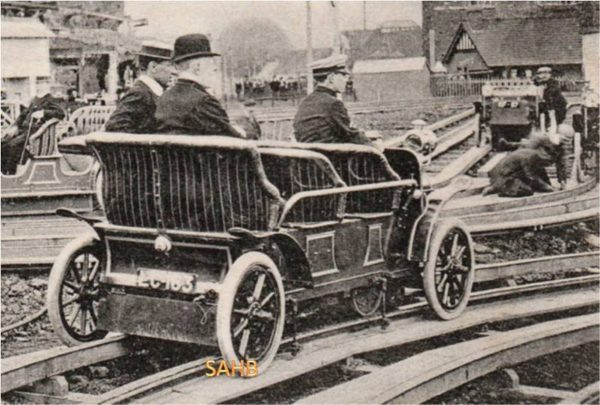 How does what appears to be a fairground attraction qualify for the attention of followers of the SAHB’s Snapshots? On a number of grounds! Electric cars are today in mass production and offer a real option for motorists with certain types of requirement. Just locally to the writer, a guided bus-way, said to be only the second in the country, opened a couple of months ago. And several manufacturers are currently said to have prototypes of driverless cars under test. But, admittedly, what we see here is a novelty ride of the amusement park type, even if a remarkably sophisticated one.

This snapshot is about a quarter of a commercially-produced photogravure postcard and the scene is titled ‘Motor Track, Imperial International Exhibition, 1909’. In total, nine of these carriages are shown, and each with three rows of bench-type seats. Dummy radiators and bonnets seem to feature at the front of most, if not all of the cars: some individual variations are apparent. The track is clearly much more extensive than even the full image shows.

The Imperial International Exhibition of 1909 was the second such exhibition held at London’s White City: the first had been set up hurriedly in 1908 as the ‘Franco-British Exhibition’ in conjunction with the Olympics, and Imre Kiralfy was the driving force behind the venture. 140 acres of farmland at Shepherds Bush became a Disney-type extravaganza with 120 exhibition buildings and 20 pavilions, many decorated in Indian style with pillars and domes and all faced in what looked (at a distance) to be white marble. Some of the features survived through to 1909, a Japan-British exhibition was staged there in 1910 and then the big Coronation one of 1911. White City exhibitions continued sporadically throughout the 1920s and ’30s. In 1949, the BBC purchased part of the site.

How were the cars powered? Close inspection suggests live rail supply of current to electric motors in each vehicle. With uniformed drivers sitting in the front seats of some of the cars, it would appear that they were individually controlled. The postcard was posted to a Miss Rose Cullen of South Hampstead on July 23 1909.