END_OF_DOCUMENT_TOKEN_TO_BE_REPLACED

SNAPSHOT 243: Illustrations from the 1903 National Show 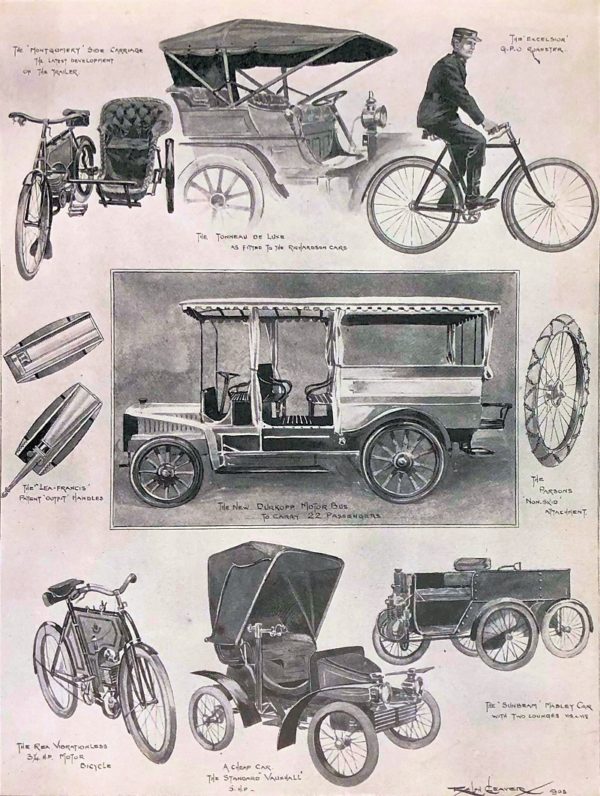 The National Motor-Car and Cycle Show opened on November 20, 1903 at The Crystal Palace outside London. This miscellany was drawn by the artist Ralph Cleaver for The Illustrated London News that appeared on November 28. It contains many fascinating items.

In centre spot is the ‘New Dürkopp Motor Bus to carry 22 passengers’. Dürkopp were manufacturers of sewing machines, bicycles and, from 1897, cars.  The presence of this German manufacturer in such an important position in the picture may seem a little odd, but In 1902 They built their first bus chassis. The North Eastern Railway had a fleet of over 15, and the Hastings bus company ran a few before their operator went bankrupt.  Most importantly, the Great Western Railway Road Motor Services were operated from 1903 to 1933 by the Great Western Railway, both as a feeder to their train services, and as a cheaper alternative to building new railways in rural areas. They were the first successful bus services operated by a British railway company.  Although their principal vehicles were Milnes-Daimler single-deck buses, smaller numbers of vehicles were also supplied by Dürkopp, alongside Dennis, Straker-Squire and Wolseley, as well as a few Clarkson 20 hp steam buses.

Looking now at the peripheral images, the main theme of the show is clear – light cars, motorcycles and bicycles.  In fact, the caption stated: “the range of prices for cars exhibited is from sixty-nine guineas to four hundred pounds”.  At the top is a ‘Tonneau de Luxe’ body fitted to a Richardson car.  This was a rare machine: a cyclecar manufactured by J. R. Richardson of Saxilby, Lincolnshire, only between 1903 and 1907.  Richardson was also a manager at the French MASS car company and it is possible that the Richardson cars were actually re-badged MASS vehicles.

In keeping with the light car theme, it is not surprising that the other four-wheeled examples are ‘A cheap car – the Standard ‘Vauxhall’ 5 H.P.’ and the always curious Sunbeam Mabley (featured in our Snapshot 199) with its wheels in a diamond pattern and its odd seating, described here as ‘two lounges vis-à-vis’.

The Rex motorcycle was a relatively well-known make, and the Montgomery side carriage is typical of those often seen in this period.  The Parsons ‘Non-Skid’ attachment for wheels was often advertised. But the final items are worthy of comment: the two cutaway illustrations of the Lea-Francis Patent ‘Outfit’ Handles.  These contained a tyre repair kit in the upper handle and a delicate but practical oil can in the lower one.  Such things have survived: a 1907 Lea-Francis bicycle was seen in 2019 on a vintage run with these same charming accessories.