END_OF_DOCUMENT_TOKEN_TO_BE_REPLACED

SNAPSHOT 182: 1935 Triumph Gloria – and more about the cars of the Stokes family 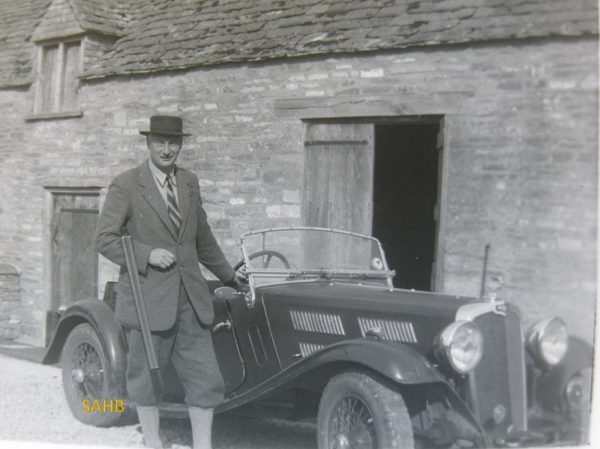 Regular watchers of our Snapshots will have seen our series of photos of the cars of Adrian Stokes: numbers 145, 149, 154 and 161.  Adrian’s daughter Teresa has contacted us with the excellent news that Adrian is still with us and is now 90 years old.  Teresa has been sending him the links to our Snapshots, and you can read his additional information in her comments under the respective articles, except for one last piece of information: the Singer Le Mans in Snapshot 149 was called Popski – from a character in a cartoon strip called Pip, Squeak and Wilfred (apparently we are all too young to remember this!).  From the internet, we find that Popski was the crazy anarchist villain; what does this say about the Singer Le Mans?

But Teresa has also sent us a picture and information about another Stokes family car for this latest Snapshot.  It is a 1935 Triumph Gloria Southern Cross Sports that belonged to her grandfather, Colonel Herbert Bland Stokes, seen here with car and shotgun outside the garage of the family home in Gloucestershire.  He called the car Pipsqueak – another character from the same comic strip.  He bought the car before the war, sold it to a local farmer when war broke out, and then bought it back after the war.  This Snapshot is from a negative that Teresa found in a pile taken by her grandmother; there were no prints of it.  But thanks to the power of modern technology, Teresa has photographed the negative and inverted it in Photoshop – and we are very grateful that she did so.

The car survives, in such excellent condition that in 2008 it won the Car of the Show award at the Ypsilanti, Michigan, Vintage Triumph Register annual convention. It can be seen on pages 20 and 21 of the online Toronto Triumph magazine “Ragtop”:

The Triumph Gloria was produced by the Triumph Motor Company in Coventry from 1934 to 1938 in a large and complex range of sporting saloons, coupés, tourers, 2-seater sports cars, drophead coupés and golfer’s coupés.  Most were powered by 1,087 or 1,232 cc four-cylinder or 1,467 or 1,991 cc six-cylinder Coventry Climax overhead-inlet-and-side-exhaust-valve engines modified and built under licence by Triumph.  It had conventional suspension with semi-elliptic leaf springs and the brakes were hydraulically-operated Lockheeds with large 12-inch drums.  The Southern Cross was made from 1934 to 1937, re-using the name previously applied to the sports version of the Triumph Super 9.  It used a shortened chassis of 96 inches for the 1,232 cc four-cylinder models and 104 inches for the 1,991 cc sixes.  From the difficult-to-read display card in another modern internet photo of Herbert Stokes’s car we think that it is a four-cylinder.

We are once again extremely grateful to Teresa Stokes for sending us this further photo of a Stokes family car – and we hope that she and her father will enjoy seeing both car and owner on our website.