END_OF_DOCUMENT_TOKEN_TO_BE_REPLACED

The Yorkshire Automobile Club held their important annual trials between Saltburn and Marske on a Saturday early in July 1913.  The chosen beach was said to be only second in its excellence to those in Florida.  There were increasing numbers of streamlined cars at this year’s event; a notable example was W. E. George’s 20 h.p. Ford.

Percy Lambert’s streamlined 25 h.p. Talbot turned in some very fast times; a small picture of it here shows its streamlining. 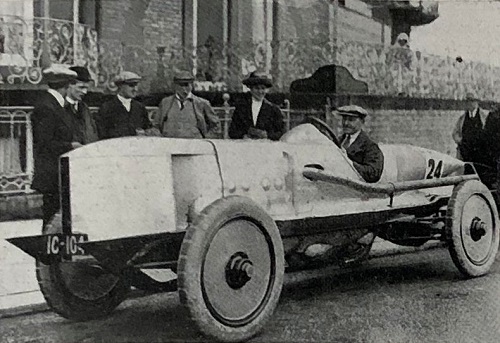 Our main picture shows the competitors assembled outside the Alexandra Hotel in Saltburn at about 8 am on Saturday, waiting for the sands to dry enough for runs to start; a late tide forced competitors to wait until 10 am.  Sadly, the report in The Car Illustrated does not give running numbers, so we cannot identify any of the cars precisely, although the Vauxhall in the foreground has the Prince Henry style of radiator.

One recorded speed (and that against a light wind) gives an idea of the capabilities of the cars: 106.52 mph by Hancock’s 30-98 h.p. Vauxhall.