END_OF_DOCUMENT_TOKEN_TO_BE_REPLACED

Rétromobile 2019: Bikes, Bédélias and Birthdays – and a gigantic truck 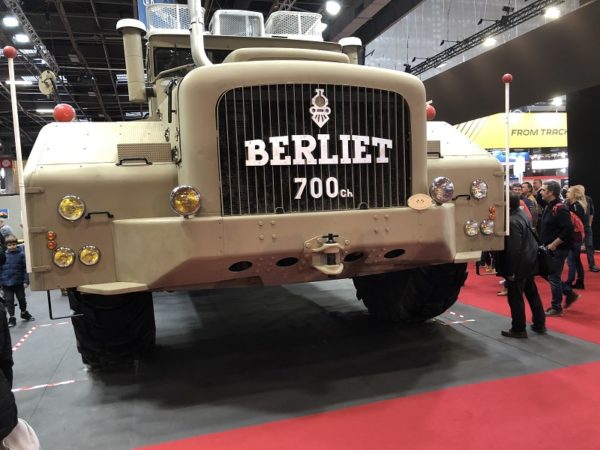 Rétromobile (6th to 10th February this year) always comes up with the finest exhibitions with the most fascinating themes – and this year was no exception.  There were five major displays: the 100th Anniversary of Citroën, the same birthday for the motorcycle and aero engine manufacturer Gnome et Rhône; a large exhibition of Minis; and a remarkable show of that bizarre but entirely practical cyclecar the Bédélia.  That makes four.  The fifth?  A single enormous truck brought all the way from Lyon by the Fondation Berliet, that upstaged every stand and display in the place.

In this pictorial report we’ve tried to give a flavour of all these displays, and of the club, manufacturer and dealer stands that have something to fascinate, chat about or buy, for the impecunious enthusiast right up to the billionaire with a gap in their car collection.

Enjoy the show, and give us your comments – we’d love to hear from you. 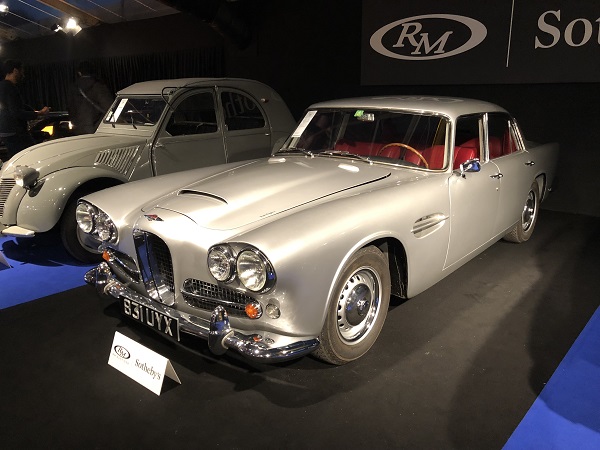 On the Tuesday before Rétromobile opens, RM Sotheby’s opens its auction preview to the public in a gigantic marquee in Place Vauban, under the shadow of Les Invalides.  One that drew our attention was this 1962 Lagonda Rapide.  Only 55 of these stylish four-door saloons were built from 1961 to 1964.  They were the first Aston Martin products to be powered by the 4-litre version of the Tadek Marek 6-cylinder introduced for the DB4 – and they had a De Dion rear axle some years before Aston used this on their DBS and V8 models. 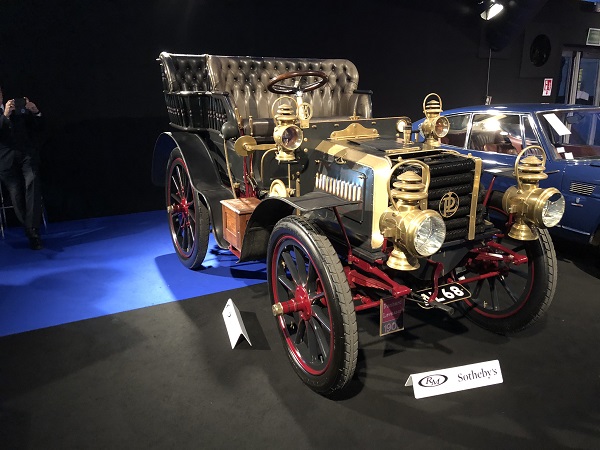 Also on display at RM Sotheby’s was one of a rather limited number of really old machines on display during Rétromobile week.  Fully restored, this 1900 car looked the part, but there wasn’t much detailed history.  We’d love to see it on the London to Brightonrun. 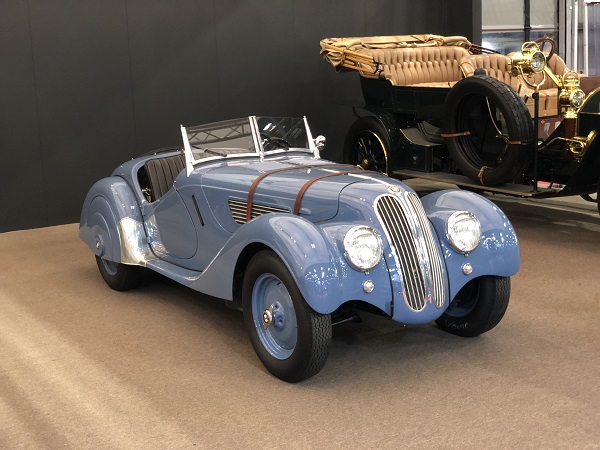 Sometimes a well-known motor car simply has to be featured because it is such a beautiful thing.  We saw this BMW on a dealer stand, unsurprisingly without a price – but it just shouted “please buy me!” to the extremely well-heeled visitors that come to the event. 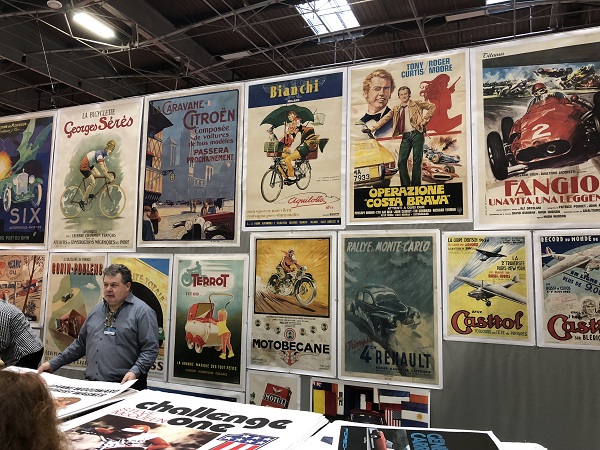 There are many stands at Rétromobile devoted to automobilia – from spare parts, through models cars, books, brochures and manuals to things for the person who has everything, such as expensive furniture and wine.  The posters on sale at several dealer stands brought some wonderful colour to the venue.  They were a mix of car advertising and cinema posters. 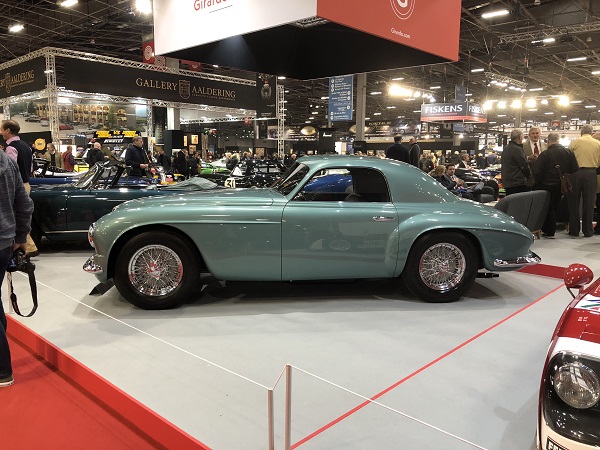 Another beautiful car on a dealer stand was this gorgeous Alfa.  Some of the post-war examples from this make are inclined to be a bit too awkward in style – but not this one, a Super Sport Coupé by Touring of Milan. 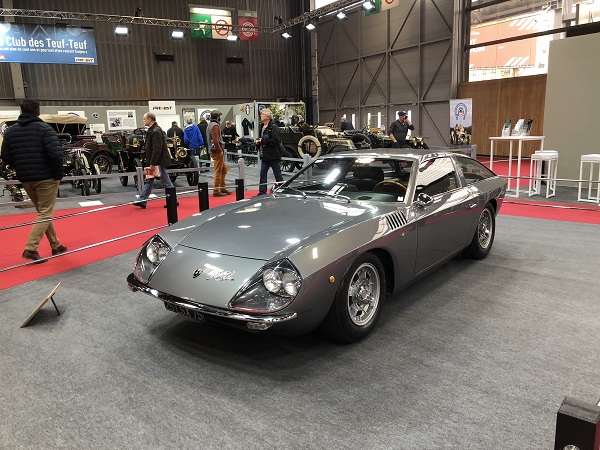 Rétromobile often comes up with unique machines, and this Lamborghini is no exception.  It was a prototype concept car built by Carrozzeria Touring in 1966 and was first shown at the 1966 Turin Auto Show.  The name referred to the famous Touring Flying Stars of the pre-war period and demonstrated an unusual idea – a shooting brake with room for just two people to travel fast in style and with luggage. 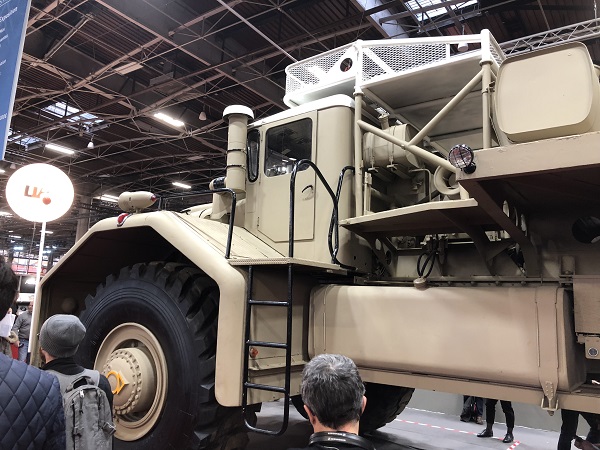 The Berliet Foundation always brings an impressive member of its vast collection to Rétromobile each year, but this year it surpassed itself.  After a complex logistics exercise involving 600 kilometres on a low loader and taking four days and three nights, with the wheels of the T100 hanging over the sides of its trailer, this 1957 monster finally arrived from Lyon in time to be the centrepiece of the entire event.

The truck was built in 1957 and worked initially in Algeria, to transport heavy equipment for oil exploration projects over sand; the enormous 2.2-m diameter low-pressure tyres were developed by Michelin specifically for the truck. 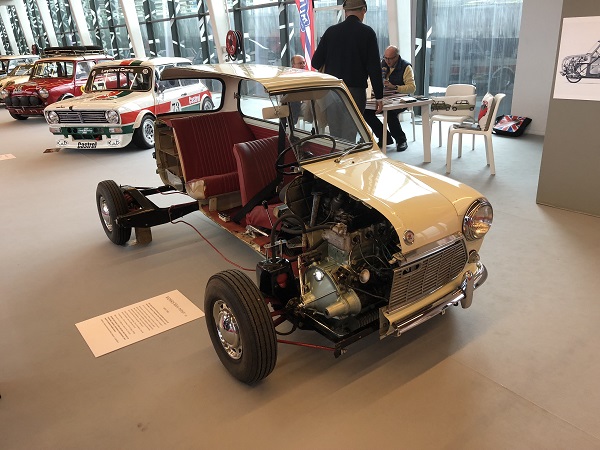 A very special exhibition of all ages and types of Mini took up the entire passageway between Hall 1 and 2.  Here we can see a cutaway exhibition Mini dating back to the very beginning in 1959 (loaned by the Haynes Motor Museum in Sparkford) , with a few examples from other years in the background. 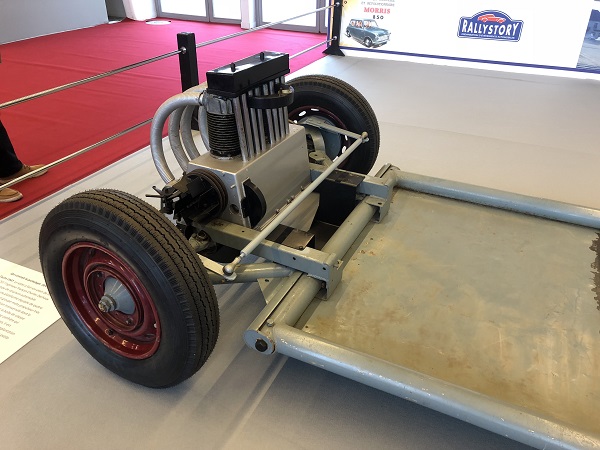 Most remarkable of the vehicles in the Mini display was the 1947 Dechaux prototype.  12 years before the launch of the Mini, this chassis has all the main elenets of the iconic Alec Issigonis design.  It is thought that the young Issigonis visited Dechuax soon after this prototype was created – and the rest is history.

Another view of the Dechaux prototype 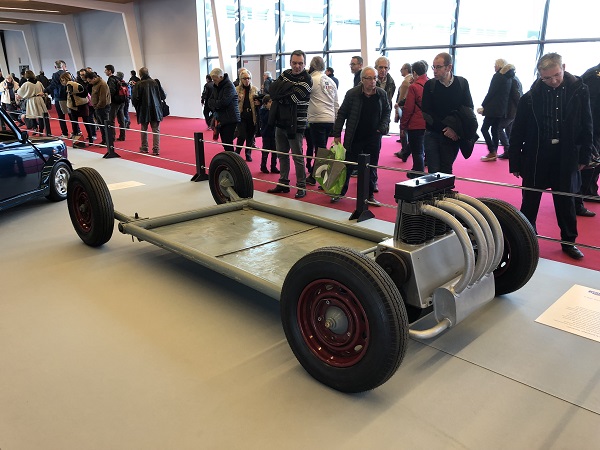 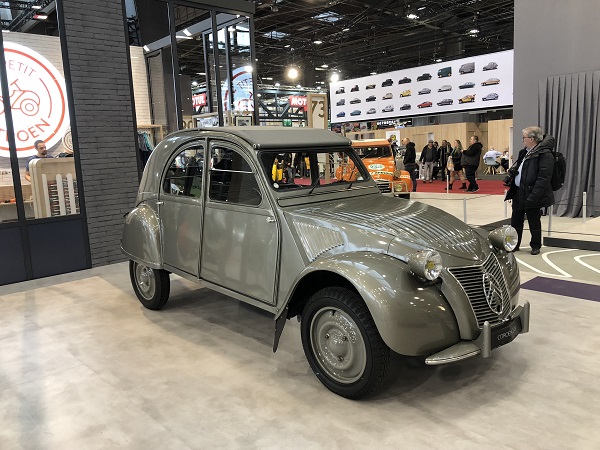 Citroën celebrated its 100th anniversary with a superbly curated exhibition of its cars in the main hall.  There were too many to show here, but this early 2CV was a particular favourite. 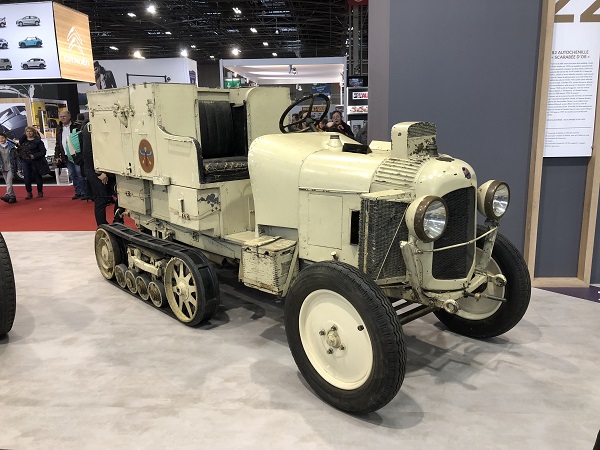 André Citroën amply demonstrated his genius as engineer and publicist with his ambitious expedition in 1922.  Up to that time, no powered vehicle had managed to traverse the Sahara desert.  This particular car is the command vehicle of a group of five machines and was called “The Golden Scarab”.  The team, consisting of only ten people, made the journey of 3,500 km in just 21 days (for a route that would have taken a camel caravan six months). 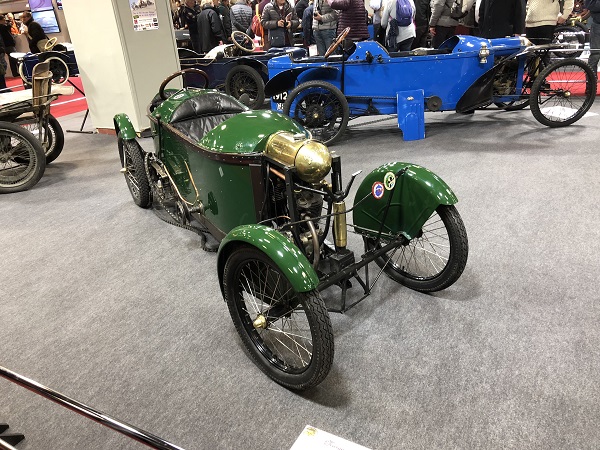 There was a big display of these crazy but delightful light cars at this year’s Rétromobile.  The Bédélia was built by Bourbeau et Devaux Co. of Paris from 1910 to 1925.   The cars carried their two passengers in tandem with the passenger seated at the front, while in the rear was the person doing the steering. Single-cylinder or V-twin engines were used. Changing gear was a complex process involving the driver slackening the drive belt by moving the rear axle forwards and the passenger moving the belt between two pulleys.  We said it was crazy. 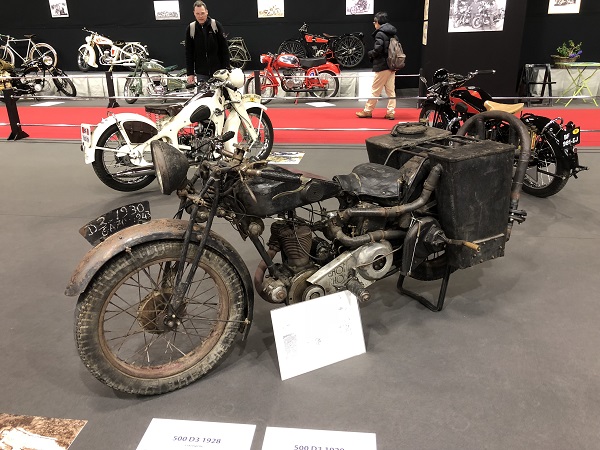 Another company celebrating a 100th anniversary at this year’s Rétromobile was Gnome et Rhône.  Founded in 1914 to manufacture aero engines, the company took over the manufacture of the British ABC motorcycle in 1919.

Among some sparkling restored motorcycles we were attracted to this example in ‘oily rag’ condition – a rare survivor of a bike running on producer gas.  Although a 1928 machine, it is typical of the conversions made in the 1940s when lack of petrol forced many users to attach equipment to generate gas from wood and thus keep their motorcycle going. 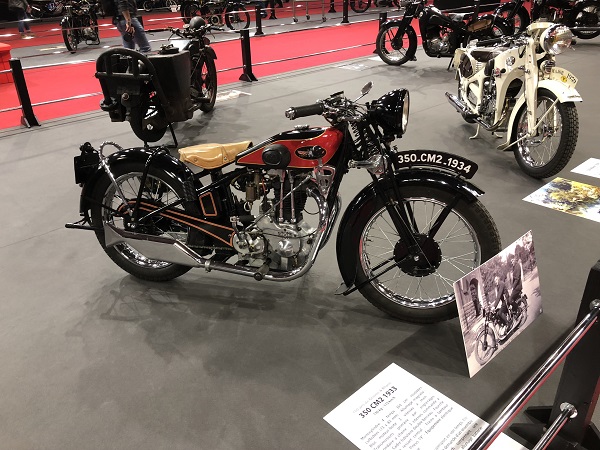 In far better condition is an example of a typical G & R from the 1930s.  This was a 350cc single-cylinder, considered to be a rapid sporting bike in its time, with a top speed of 72 mph. 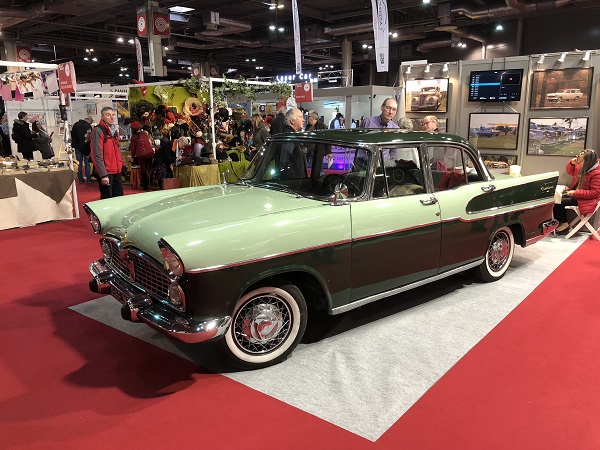 We end our report with this French machine with an American influence.  The Simca Vedette was a large car, manufactured from 1954 to 1961 at the Simca factory in Poissy.  Simca acquired the Poissy factory from Ford France, along with the model line, in 1954. The Vedette was therefore initially still marketed as the Ford Vedette – and we can see that this is very much a car in the transatlantic style.

After three years in production, the Vedettes were given new names and a new, elongated body, with a more ornate front end and large tailfins, making the cars even more American-looking than before.  Using the new body, the Versailles was replaced by Simca Vedette Beaulieu and the Régence by the Chambord, while the estate retained the Vedette Marly name.

Thank you for looking at our report.  Please do send us your comments and any information you want to add on the vehicles we’ve shown.