END_OF_DOCUMENT_TOKEN_TO_BE_REPLACED

Passe-Partout in England – a family story, and more information 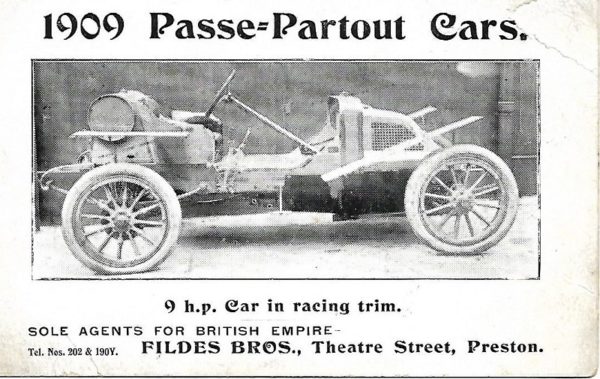 Following our Snapshot 286 on the 1907 Passe-Partout, we were contacted by Roger Fildes.  His ancestors ran the company that imported these cars to the UK: Fildes Bros. of Theatre St. Preston in Lancashire.

These are rare cars, especially in the UK – in fact, does anybody know of any surviving examples here?

Roger and his family have kindly given us some information and family photographs on Fildes Bros. and Passe-Partout cars, with permission to show them on the website.  The first picture is from a promotional postcard showing a 1909 Passe-Partout in racing trim.  We in the SAHB have a photo from the 1 December 1907 issue of Les Nouveaux Sports taken at the 28 October 1907 Coupe des Voiturettes, showing the three cars in the team, each of them very similar to the postcard view, and we show it here.  An article in L’Anthologie Automobile Nr. 27, 1975, kindly provided to us by Ariejan Bos, confirms that these racing cars had their radiators behind the engine, unlike the road cars we see later, which have their radiators ahead of the engine. 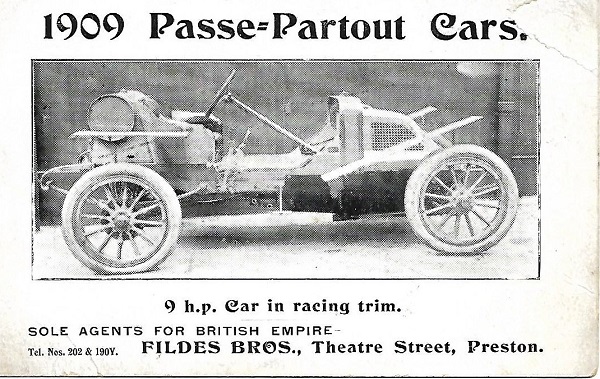 The Fildes Bros. postcard showing a 1909 9 h.p. Passe-Partout in racing trim.  The radiator is behind the engine. 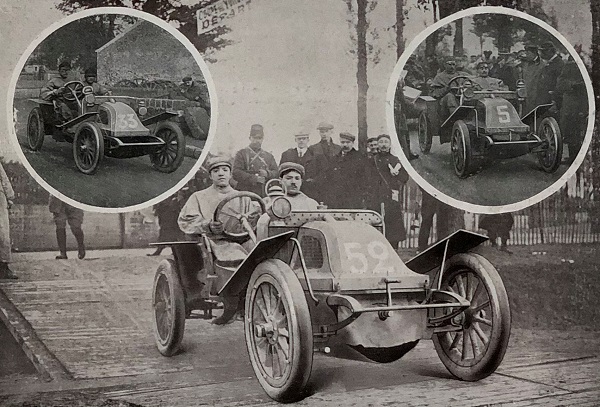 The second Fildes family postcard is of a 1909 14-20 h.p. touring car.  Apart from the lack of a cooling grille on the side of the bonnet, it appears to be very much the same as the racing car, albeit with a larger engine. 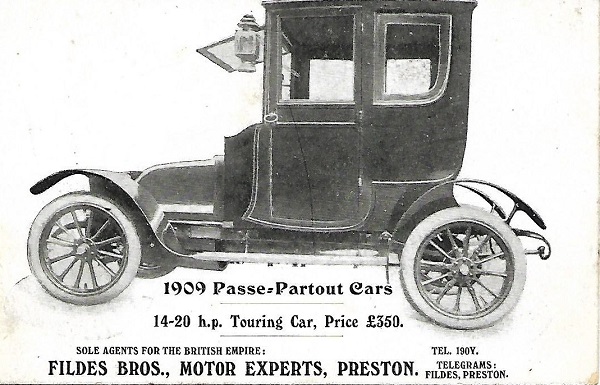 Talking of engines, the third postcard gives some more information.  The early cars had single-cylinder engines from Aster or Buchet, but 4-cylinder monobloc engines were said to have been used from 1907.  And here we have a picture of the 14-20 h.p. 4-cylinder engine.  Its manufacturer is unknown.  An advertisement in 1907 stated that Passe-Partout used de Dion-Bouton engines, but de Dion-Bouton historian Michael Edwards confirms that this 4-cylinder is not by them, and Ariejan Bos and Fons Alkemade have suggested that it was probably built by Passe-Partout themselves. 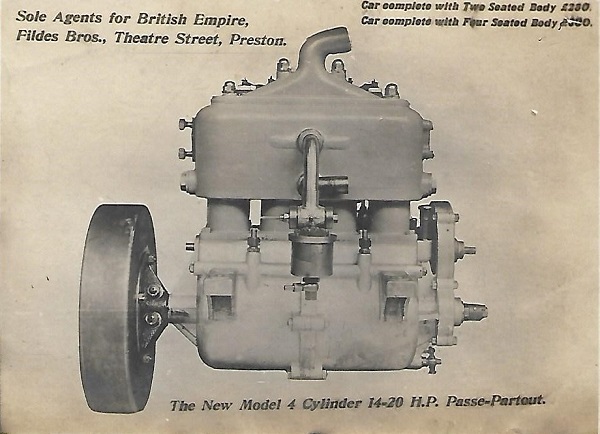 The 14-20 h.p. 4-cylinder Passe-Partout engine, probably made by the company themselves.

The mystery of the de Dion-Bouton engines has been at least partly solved.   Ariejan Bos has told us that in 1908 the cars were still equipped with either an 8-9 h.p. single-cylinder or an 8-10 h.p. 4-cylinder de Dion engine.  And we have now found a drawing of the 1908 8cv (8-9 h.p.) Passe-Partout, from an article in the 15 February 1908 issue of La Vie Automobile.  The article states that the single-cylinder 8-9 h.p. engine is by de Dion. 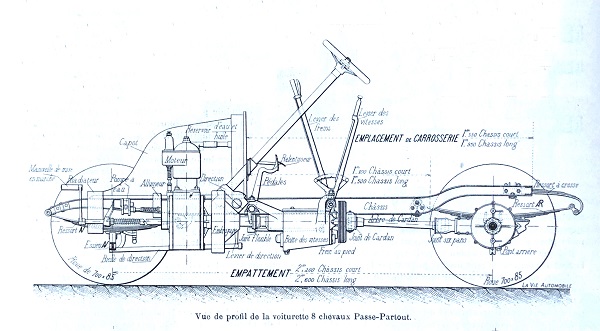 The fourth postcard is a delightful view of another 9 h.p. Passe-Partout with all the expected features of these cars.  Its registration, CK 579, is from Preston.  The radiator is at the front, between the dumb-irons, as also shown in the above drawing. 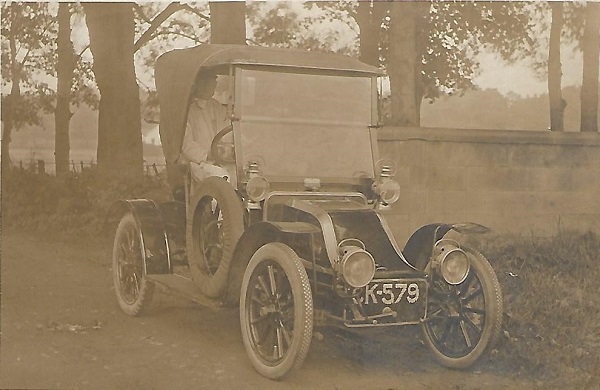 The final photo here, also from the Fildes family archive, is completely different, and mysterious.  It is of a lorry and dates from a similar period.  The Fildes family believe that the CF monogram on the radiator stood for their family names of Criddle and Fildes – and on the original photo the word Pendleton (a district of Salford) is just visible under the CF.  The registration, BA 917, is from Salford.  We understand that the registration records for Salford still exist in the Salford Archives Centre – so we are researching that too, because we know of no lorry manufacturer with those initials. 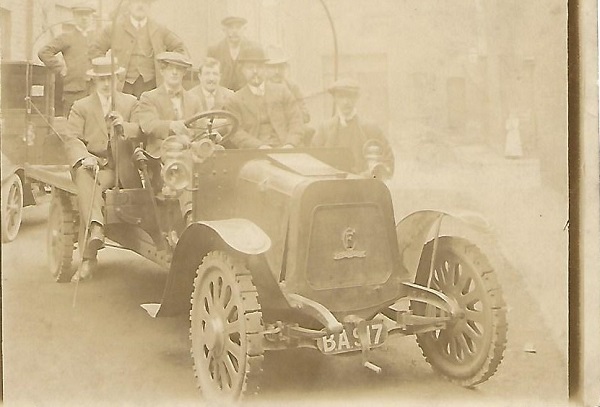 The mystery CF Pendleton lorry with its Salford registration

We are most grateful to Roger and his family for their permission to use these pictures; we shall keep you posted on any result from our further delving into the identity of the lorry.