END_OF_DOCUMENT_TOKEN_TO_BE_REPLACED

by Peter Moss and Richard Roberts

The plethora of texts appearing in recent years on ‘Rolls-Royce’ is a publishing phenomenon in its own right, but this memorable magnum opus uniquely focuses on the remarkable range, volume and quality of advertisements and sales material emanating from Cook Street, Manchester and Derby from the marque’s inception until the outbreak of the Second World War.

The Hon. C.S. Rolls went into partnership with Henry Royce and Claude Goodman Johnson in 1902, and the latter, often referred to in the literature as the ‘hyphen’ in Rolls-Royce, masterminded a brilliant stream of seductive publicity which highlighted the refinement, ‘…silence and absence of vibration…’ of their cars. At a time, the sleeve-valve Minerva was the sole competitor in terms of refinement but Johnson was quick to stress the benefits of ‘…Tappet versus Piston (i.e. sleeve) Valves’.

Whilst ‘The Best Car in the World’ became Royce’s lietmotif for decades, by 1906, ‘silent’ and ‘all-British’ were deemed to be its best selling features, quickly followed by ‘The Best Six-cylinder Car in the World’ or a year later, ‘Rolls-Royce is THE SAFEST CAR’. Johnson quickly saw the benefit of entries for reliability trials with ‘14,371 MILES Non-stop (officially certified)’ trumpeted in their August 1907 advertisement. By 1909 Johnson was offering an unheard-of three-year guarantee, manifesting his confidence in the 40/50 HP Rolls-Royce’s unmatched reliability, and in the same year, pioneering motorist Lord Montagu of Beaulieu had declared in a ‘Times’ advertisement that the ‘…six-cylinder Rolls-Royce was the BEST CAR IN THE WORLD’, allegedly the first time this legendary mantra had appeared in print. Johnson also presciently saw the benefits of competition successes at the Isle of Man TT but also at the 1913 Austrian Alpine Trial which publicised both the 40/50 HP car’s performance and durability. Until 1946, Rolls-Royce had never produced a complete car, their chassis being delivered to various coachbuilders for bespoke bodies, and even before the outbreak of the First World War, advertisements for such eminent coachbuilders as Hooper, H.J.Mulliner, Barker, Maythorn and Salmons, who later bodied most of the better chassis on offer as competition, capitalised on their association with ‘The Best Car in the World’. Derby was not averse to publicising their cars’ contribution in 1915 to hostilities in France by supplying two 40/50 HP cars each to Generals Joffre and Foch and to the French war minister, M. Poincaré. In 1917 ‘The Motor’ (when such journals retained their definite article in the masthead!) advertised the 40/50 HP car with photographs of T.E. Lawrence’s beloved armoured Silver Ghost performing in the Arabian desert.

Post-war, Derby’s publicity machine blossomed; Charles Sykes, sculptor of the Royce mascot ‘Spirit of Ecstasy’, and society portrait painter Arthur Ambrose McEvoy were commissioned to produce superb colour images of Royces in settings which reflected the prestige of potential customers. Thirty of these full-colour reproductions appear on full gloss art paper and are a highlight of the publication. 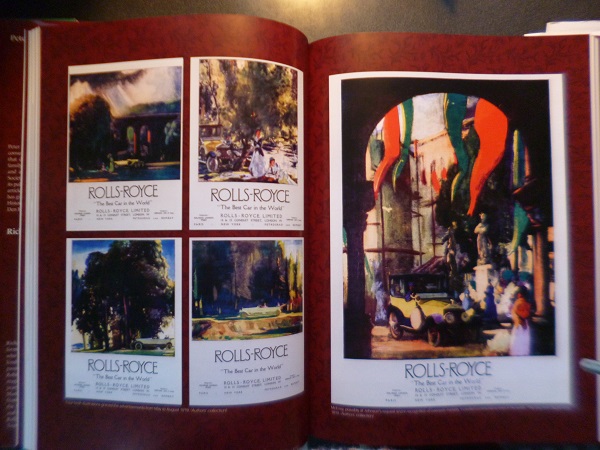 The noted motoring artist, Gordon Crosby of ‘The Autocar’ produced full-colour covers for his journal advertising the Silver Ghost, also reproduced here. Crosby had been a draughtsman in the Daimler engineering design office, accounting, no doubt, for his authentic depiction of the cars’ mechanical components.

By 1923 the new ‘small’ 20 HP Royce was given the Johnson treatment, but now with colour photography adding allure to Derby’s sales catalogues. A reversion to coloured drawings advertised the Phantom II’s introduction with fine-line ink drawings of selected details. It is interesting that the authors have seen fit to include advertisements for the Phantom II’s major rival, W.O.Bentley’s magnificent Eight Litre, which many pundits at the time and since have declared to be superior in every way to the Royce. Bentley claimed ‘100 MPH WITHOUT NOISE’ and declared the Eight Litre to be ‘THE WORLD’S FINEST CAR’; Derby directors’ responses to the latter claim are not recorded.

Rarely seen in the literature and most welcome, is a full discourse on how Rolls-Royce marketed their 40/50 HP cars produced from 1919 until 1934 at Springfield, Mass., USA with full-colour renderings and beautiful line drawings of coachwork styling both in-house and by noted American coachbuilders, far in advance of anything produced contemporaneously in Britain.

The popular 20/25 HP chassis (1929-1936) gave British coachbuilders an opportunity to practise their skills, and their renderings printed in full colour are yet another delightful addition to this publication which concludes with equally seductive images of the Phantom III, 25/30 HP and Wraith before the outbreak of war halted chassis production at Derby.

The linking commentary is discrete, appropriately terse and does not overshadow the wonderful illustrated material which after all is the raison d’être of the publication.

Most emphatically, this book is a monumental achievement by its distinguished authors (not least in the labour of assembling with erudite commentary such a diverse wealth of material) but also by their publishers. Every enthusiast for the Royce should have a copy on their bookshelves; hours of contented browsing will ensue as a welcome palliative to enforced self-isolation in the months ahead!

Footnote: can we expect a companion volume devoted to Crewe?