END_OF_DOCUMENT_TOKEN_TO_BE_REPLACED

An American Journey – Part Three: The build-up to the Hershey Fall Meet 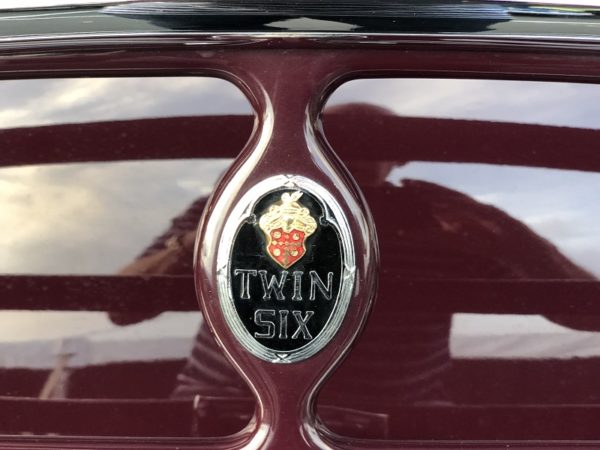 And finally to the main target of our American journey: Hershey.  Home of the Antique Automobile Club of America Eastern Division National Fall Meet.  No – you do not have to remember all that; just like Beaulieu or Georgano, it only needs one word: “Hershey”.

We hope to give you here in Part Three the flavour of the tremendous atmosphere that builds up over the days that lead up to the opening of the event on 10th October.  In Part 4 we’ll move on to a visit to the Rolls-Royce Foundation, and in Part 5 to the Fall Meet itself.

Only in America: 1990s Freightliner Cabriolét Sportliner with minimal accommodation (for an entire football team) 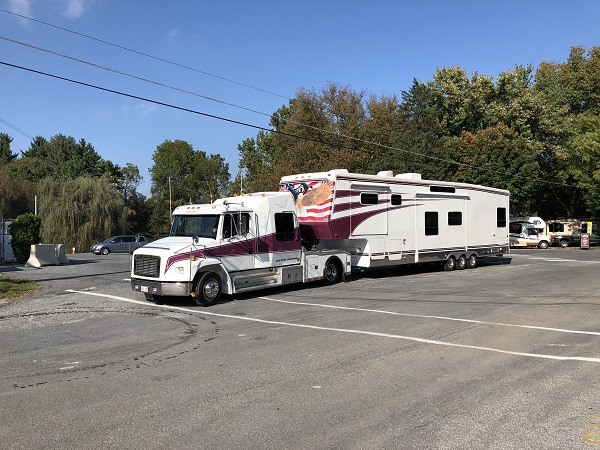 Arriving at the luxurious campsite at Hersheypark we knew that our recreational vehicle was not the biggest – but this was outrageous (and really rather wonderful).  Their wide-screen TV was bigger than our RV. 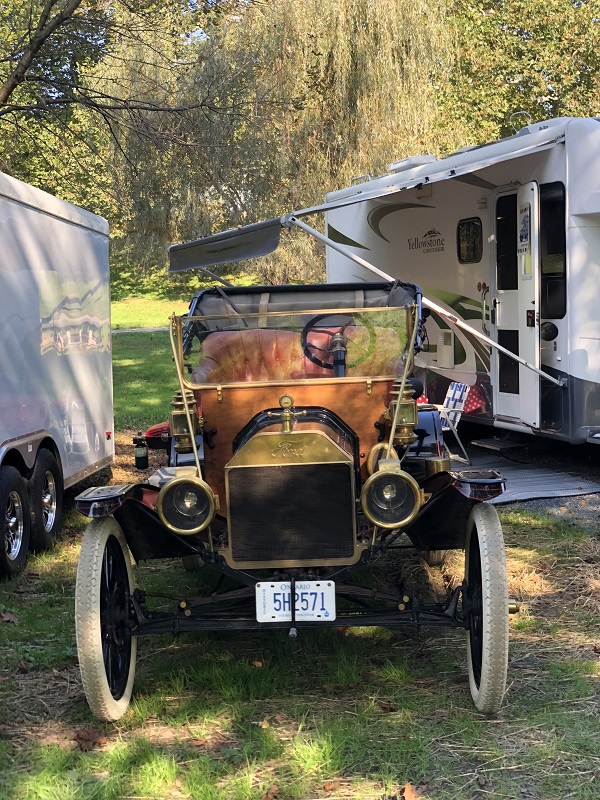 This was the very first vehicle that confirmed that the Fall Meet was really here.  A very friendly couple, John and Janet from Ontario, were parked close by.  (No, not Janet and John; they know what that means).  The Model T had come on trailer, but John was adamant: “It could have done it – it’s only 500 miles.”  We were due to start some research for a book the next day at the Rolls-Royce Foundation in the aptly named Mechanicsburg nearby, but John pointed out that the AACA Library was here in Hershey, and opened earlier – so that is where we went first… 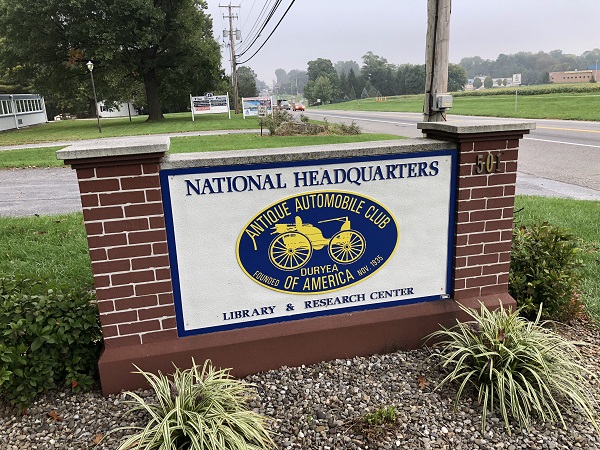 Just to confirm you’re in the right place: a ca. 1920 Overland on the front porch 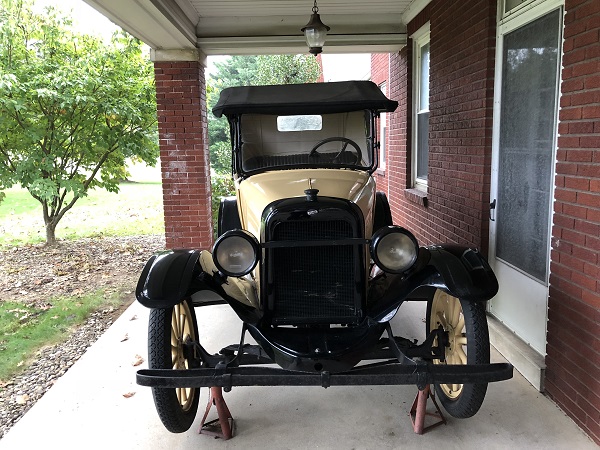 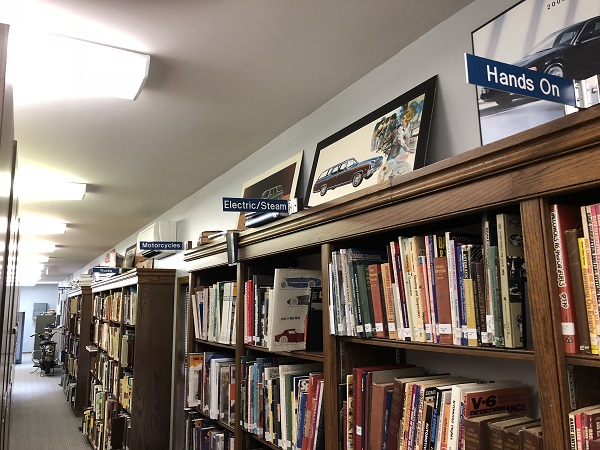 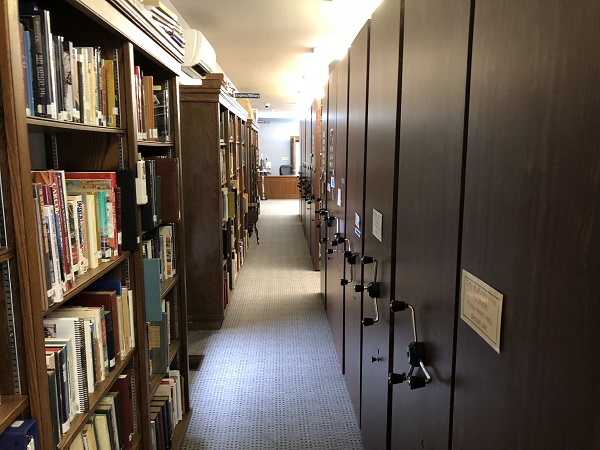 Inside one bay of the stack 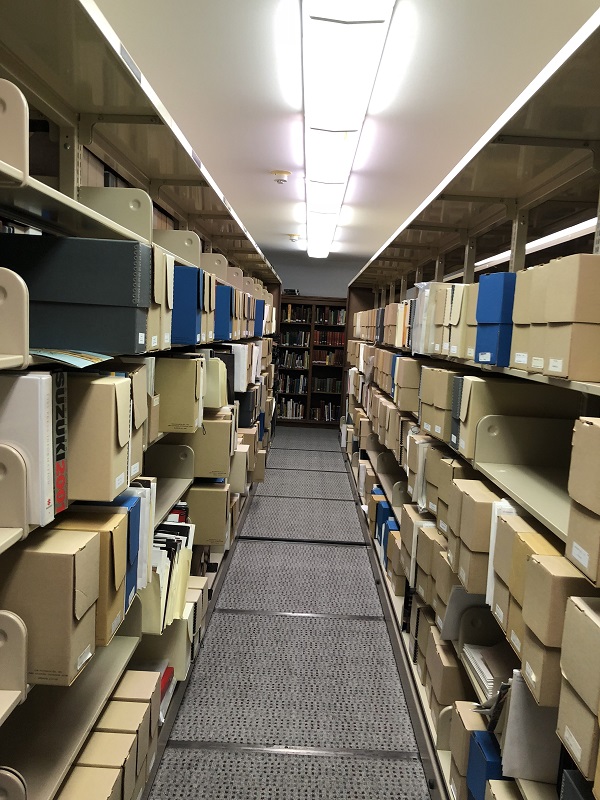 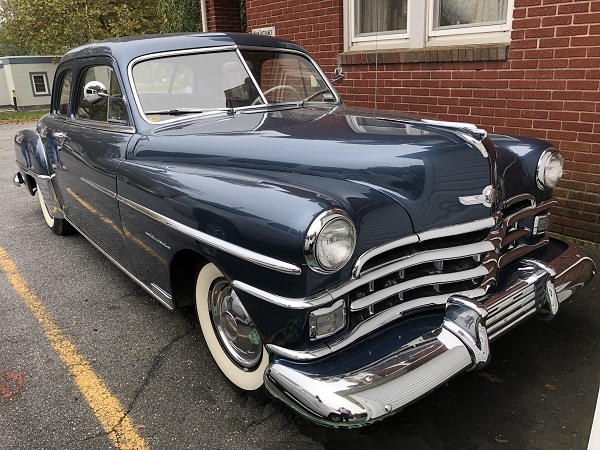 As we saw with the Overland, the AACA Library receives donations of automobiles as well as literature.  This lovely 1950 6-cylinder Chrysler Windsor had just been sold for the heady sum of around $6,000 to replenish AACA funds.  It was awaiting collection by its lucky new owner. 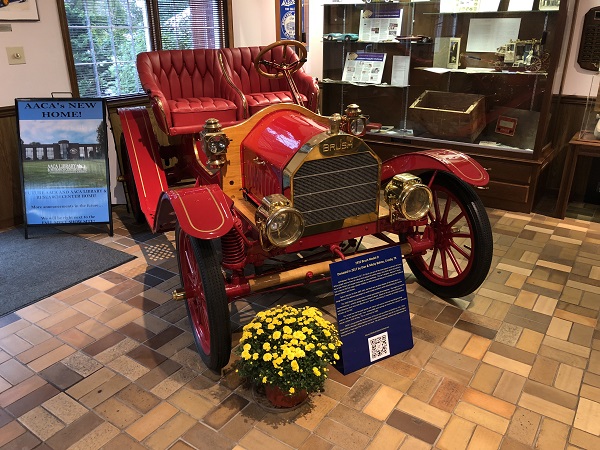 Furthermore, in the foyer were a 1906 Mitchell C-4 Roadster, a 1914 Metz Model 22, a 1940 Ford Deluxe Convertible Coupe, and this 1910 Brush Model D.  And alongside the Brush is a placard announcing the Library’s new home – essential as a result of its never-ending expansion.  This ‘new’ building is right alongside one of the fields of the Hershey Fall Meet and will be refurbished to accommodate all the enhanced facilities planned for the future. 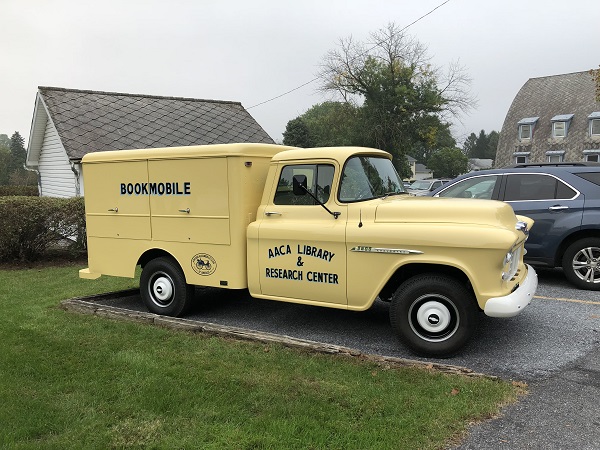 The AACA Library also goes on its travels.  Here is the Bookmobile, spick and span and ready to go to the Fall Meet where the Library has its own tent throughout the four days of the event. 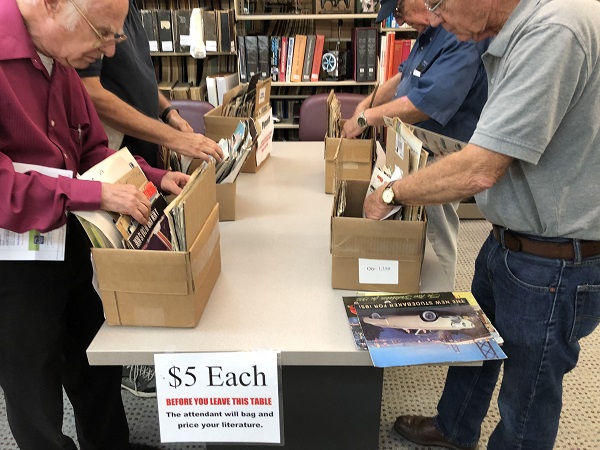 On the late afternoon and early evening of the Tuesday before the Fall Meet opens, the Library holds its by-now traditional yard sale, where a mouth-watering selection of surplus stock is sold off at highly tempting prices.  And a hot dog and Coke can be had at equally low cost to maintain stamina as boxes are searched and some (relatively gentlemanly) elbowing and “I saw it first” goes on.

We cannot leave the Library without paying heartfelt tribute to Head Librarian Chris Ritter, Catalog Librarian Mike Reilly, Assistant Librarian Matt Hocker and the rest of the Library team, for their unfailingly patient and efficient help during the research that we were doing for a new book.  (We’ll tell you more about that as the project develops).  Tentatively asked whether they had anything in our field of interest, they simply asked: “What year do you want to start?”  They sat us down, and brought out box after box of the most jaw-dropping material – from the UK as well as the USA – and scanned it and put it on the Cloud before we even left the building.  Naturally, the Library charges for this service – but the cost is eminently reasonable.

To illustrate the archival expertise and dedication of the team, we heartily recommend this video, starring Chris and Mike: 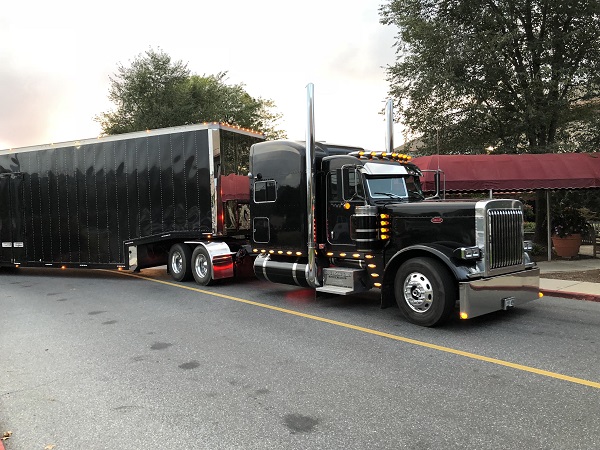 And so to the evening of Tuesday 9th October – and the build-up to the RM Sotheby’s two-day auction at Hershey Lodge on 11th and 12th October.  Here is an enormous Peterbilt Semi (see the similar one in our Slider), based at RM Classic cars in Blenheim, Ontario, arriving with some of the more exclusive lots.  But already some delicious cars were being collected in the open marquees outside the Lodge.  Here are a few of our favourites. 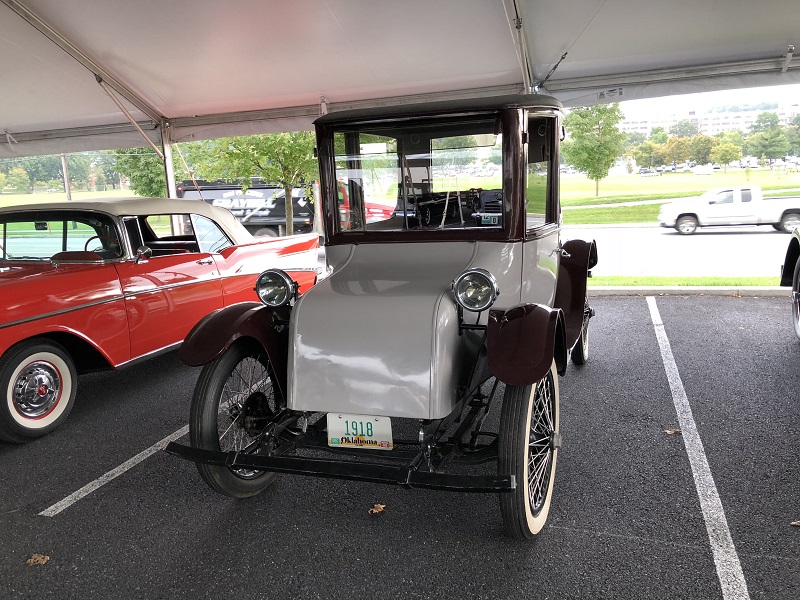 George Milburn (1820-1883) was born in Alston, England, and emigrated to Canada and soon after to Indiana, where he married.  A daughter, Ann, later became the wife of Clement Studebaker.  In 1848, Milburn started a number of successful ventures that netted him a fortune of over $400 million.

Meanwhile, in 1852, Henry and Clement Studebaker started a blacksmith shop in South Bend and in 1856, Milburn’s Mishawaka Wagon Works subcontracted out 100 wagons to the Studebakers to complete.

Milburn decided to move the complete operation of his wagon company to Toledo, Ohio and soon became the largest manufacturer of farm wagons in the world.

Before 1910, Milburn was producing bodies for the Ohio Electric car company.  With its vast manufacturing ability and its view that the electric car could be made lighter, lower and cheaper, the company decided to make its own electric car.

In September of 1914, the Milburn Wagon Company thus began the manufacture of their 1915 Milburn Light Electric automobiles, based on a design by Karl Probst, who later designed the Bantam Jeep.  During their eight years of production, from 1915 to 1923, they turned out over 4,000 cars.

Milburn Electrics were among the most popular and elegant cars of the time and were used by President Woodrow Wilson’s secret service men. President Wilson himself owned a 1918 Milburn Electric, which he drove around the White House grounds. 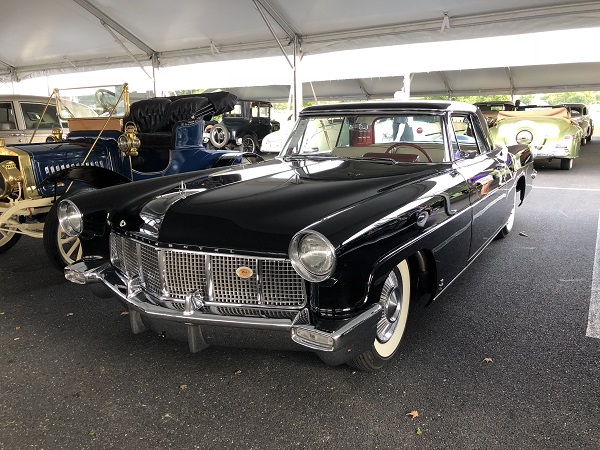 Your webmaster’s favourite post-war American car.  The superb 1956 movie “High Society” contains a definitive piece of product placement that shows all future generations, Broccoli included, how it’s done: whilst the rich and famous of the Hamptons arrive in elegant motor cars of all kinds, Grace Kelly’s father arrives in a Continental Mk II. No further words are needed. 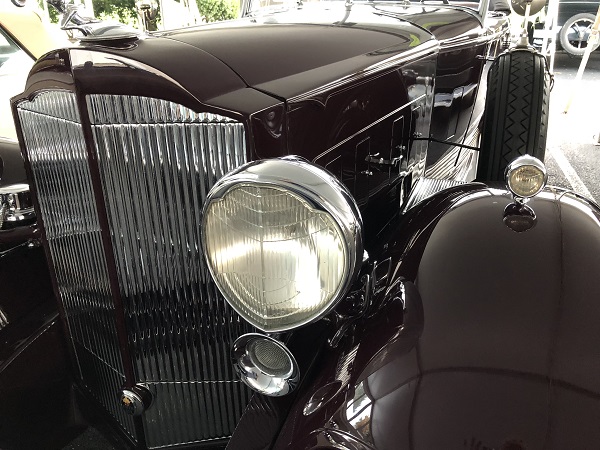 This Packard, with original individual custom bodywork by Dietrich, had never been shown since it recent full restoration.  It typifies for us the dramatic yet (almost) understated elegance of the ‘Golden Age’ of American luxury automobiles.  Several well-heeled potential buyers at the viewing suggested that Packards of the time were the best of the best – above Cadillac and Lincoln and at the very least the equal of contemporary Rolls-Royces.  ‘Ask the Man who Owns One’. 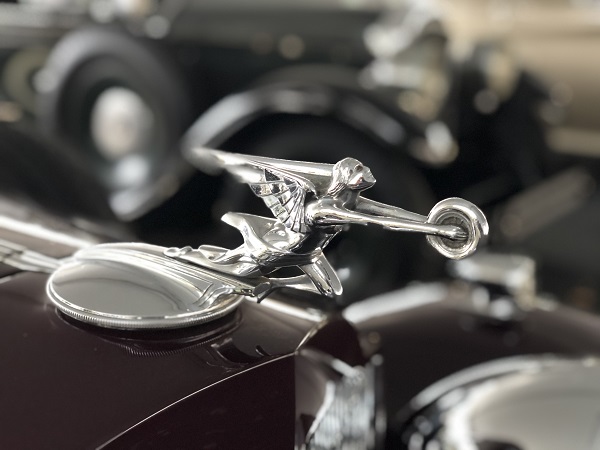 That’s it for now.  Join us again soon for Part 4: a visit to the Rolls-Royce Foundation.