END_OF_DOCUMENT_TOKEN_TO_BE_REPLACED

A triumphant collection – with two cats 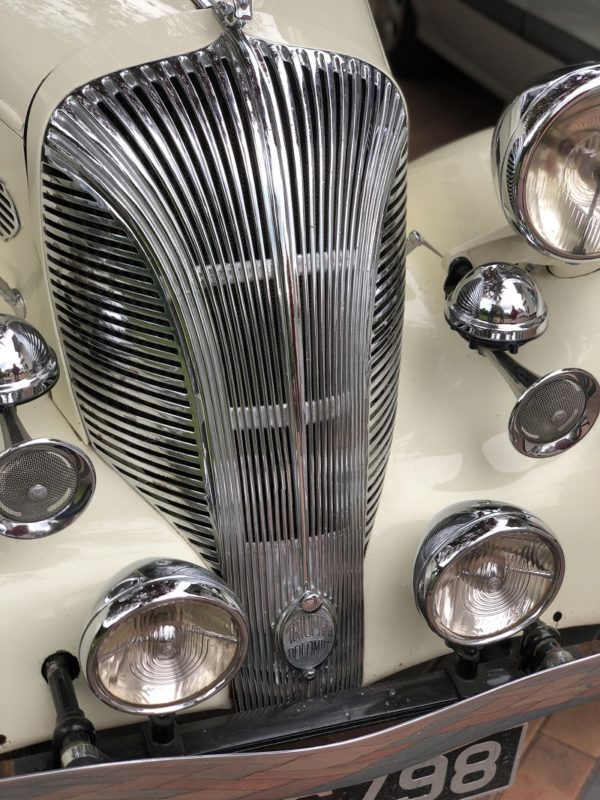 Imagine passing by a house many times, and catching a glimpse of something very interesting – through a half-opened garage door, or in the drive but only showing the metaphorical lady’s ankle of a partial wheel and tyre under a car cover.  But then one day we passed by and one of the owners was there in the garden.  A mention of a shared enthusiasm, and we were warmly welcomed.

Mandy and John share a deep passion for their three beautiful cars.  They showed us round each one and have very kindly given permission for us to display them here.

We start with the first cat in our title: a 1954 Jaguar XK120.  John modestly talked about its imperfections, but it has immaculate paintwork and a beautifully patinated interior – and, at a recent historic vehicle meeting in Cheshire, it won a prize.  John was amazed.  We were not.  It is no delicate concours queen, however.  Power steering has been fitted, which has made a smaller steering wheel possible – and has freed up much more space in the cockpit.  It was off on an extensive rally in Wales a few days after our visit, and is an entirely practical touring car. 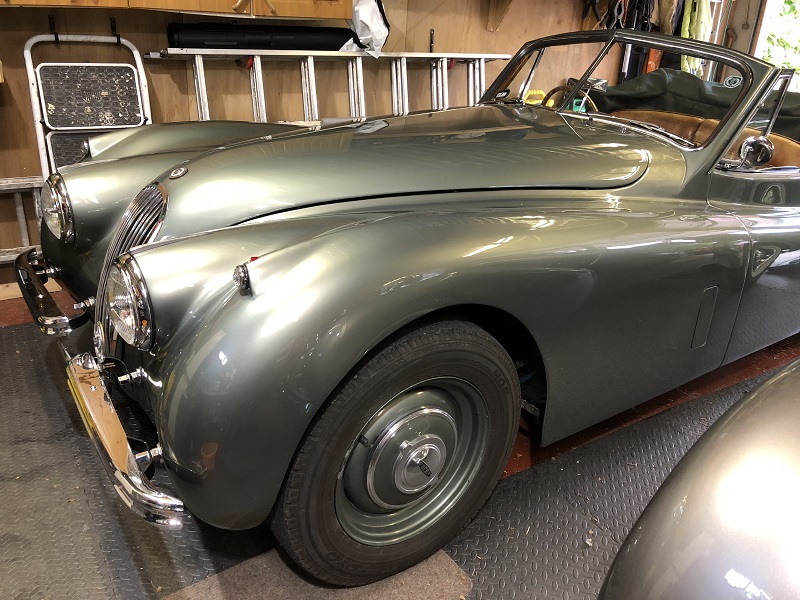 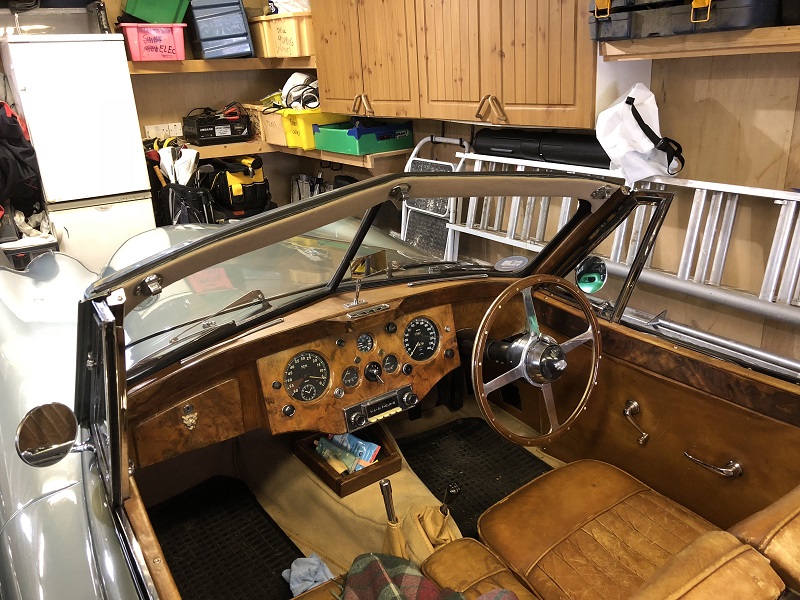 Cliché alert: the view most people will have of this lovely car 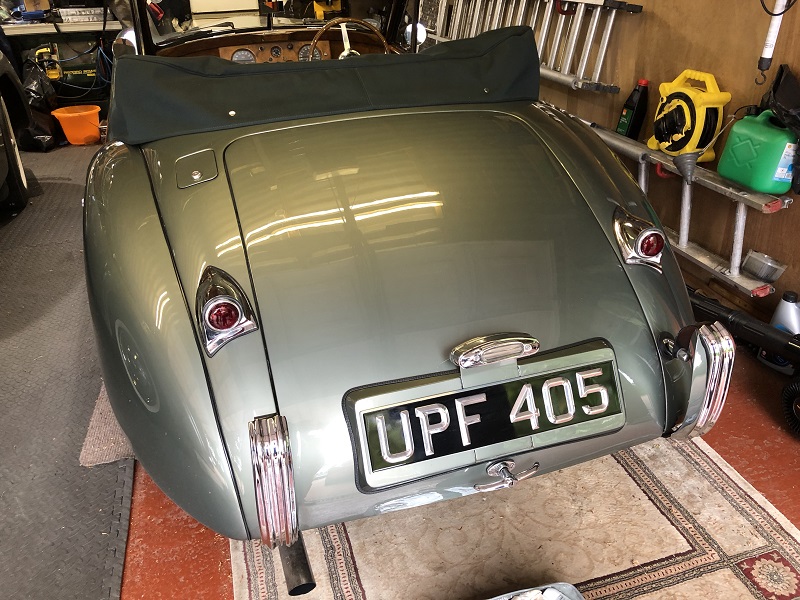 The second car is their 1949 Triumph Roadster, a model known to one and all as a ‘Bergerac’ car – after the famous detective series.  Also in immaculate condition, it naturally has the dickey seating that you can see in our pictures.  The cream dials on the neat instrument panel are a particular delight, as is the very smart engine: the 2,088cc 4-cylinder overhead valve unit from the Standard Vanguard, fitted to the 1948 and 1949 2000 versions. 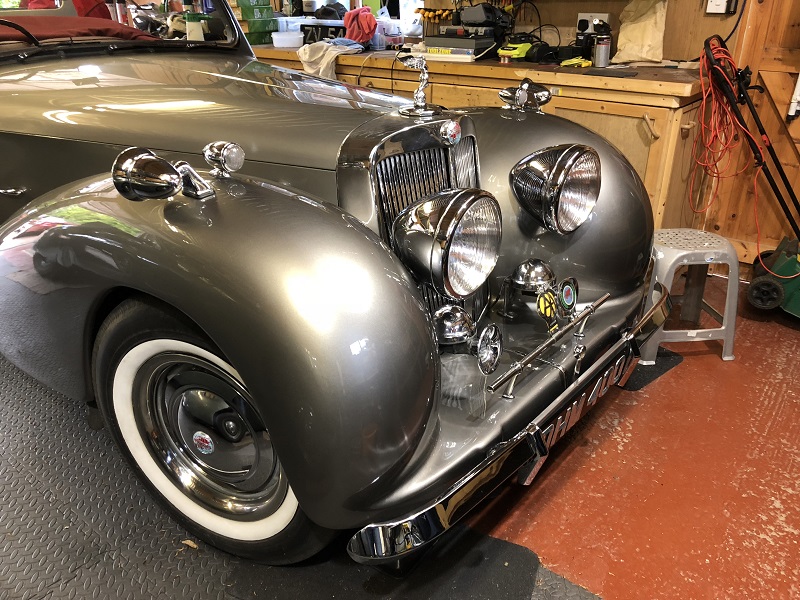 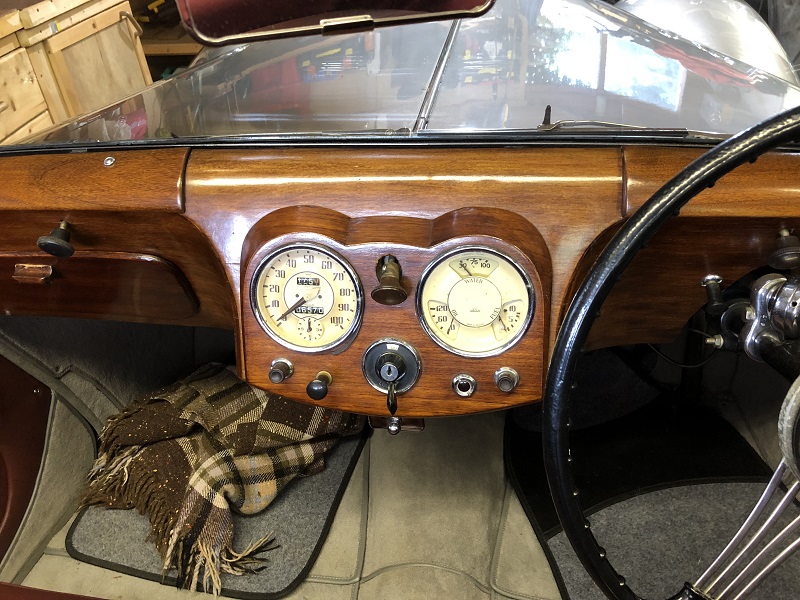 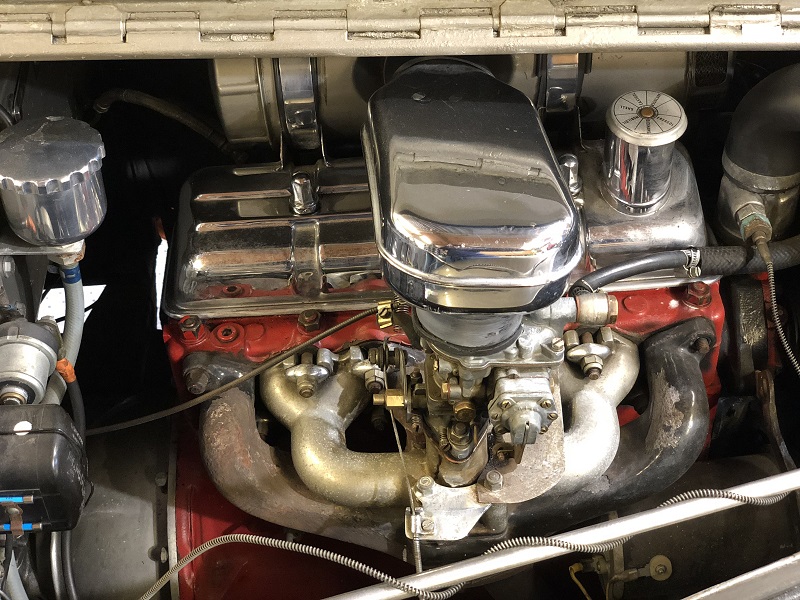 The dickey seat – ready for a tour with friends 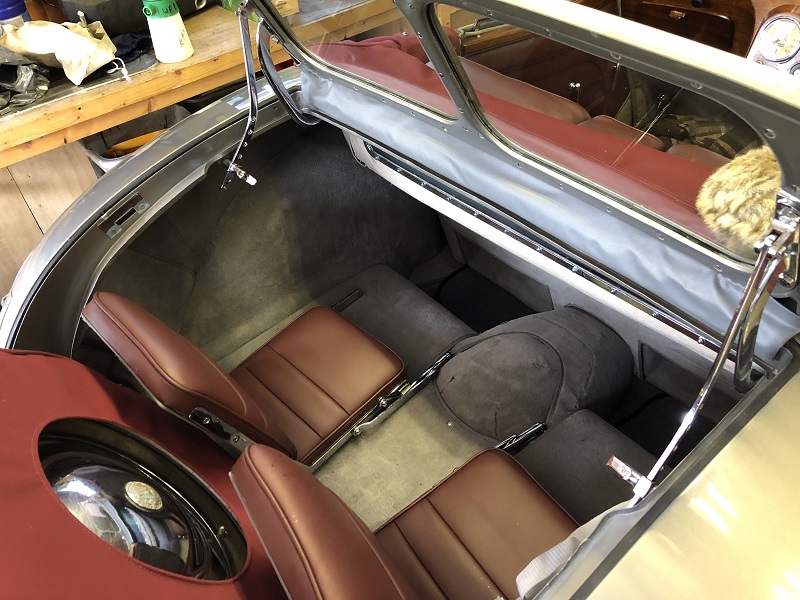 So there is absolutely nothing wrong with this car, is there?  Oh yes there is: the column gear change.  As John demonstrated its precarious operation, we could perfectly well understand how sometimes it goes on strike and refuses to budge.  There are all sorts of levers and pivots, but it does have the advantage of allowing three-abreast seating in front. 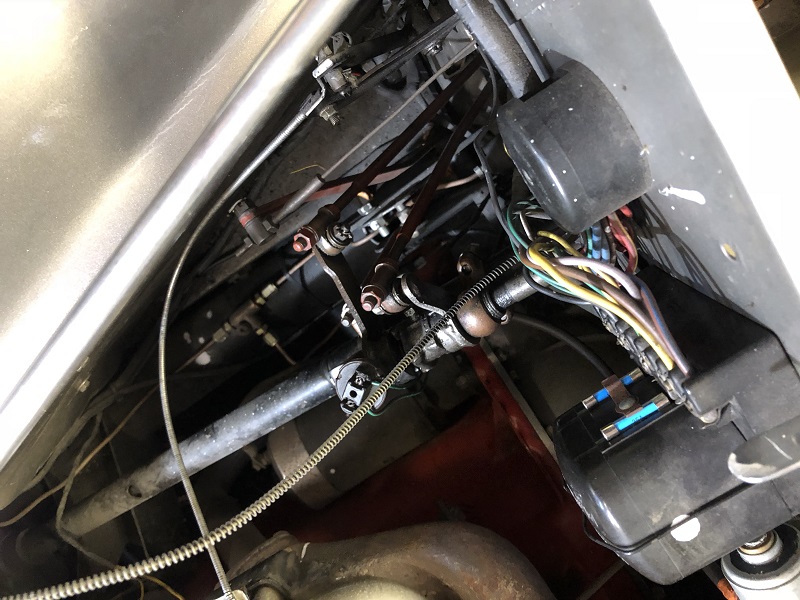 The final machine is a rare one indeed: a 1939 Triumph Dolomite 14/60 Foursome Drophead Coupé with original Tickford body by Salmons & Sons, and one of only three survivors (amazingly all three have their original bodies) out of an original production of 16.  Between 1936 and 1940 Triumph made a large range of Dolomite saloons, sporting saloons, drophead coupés and roadster coupés powered by Triumph’s own 4- or 6-cylinder overhead valve engines – all with the distinctive ‘waterfall’ grilles.  This one has the 1,767cc 4-cylinder engine.  As we can see from the pictures, it is in fine running order, but John is determined to give it a proper restoration to concours condition.  The only criticism he has of the car is of the door cards – which he feels should be in a sunburst pattern to go with the Art Deco exterior.  Sounds like a good idea to us.  We look forward to seeing the car again when it has had the attention it deserves. 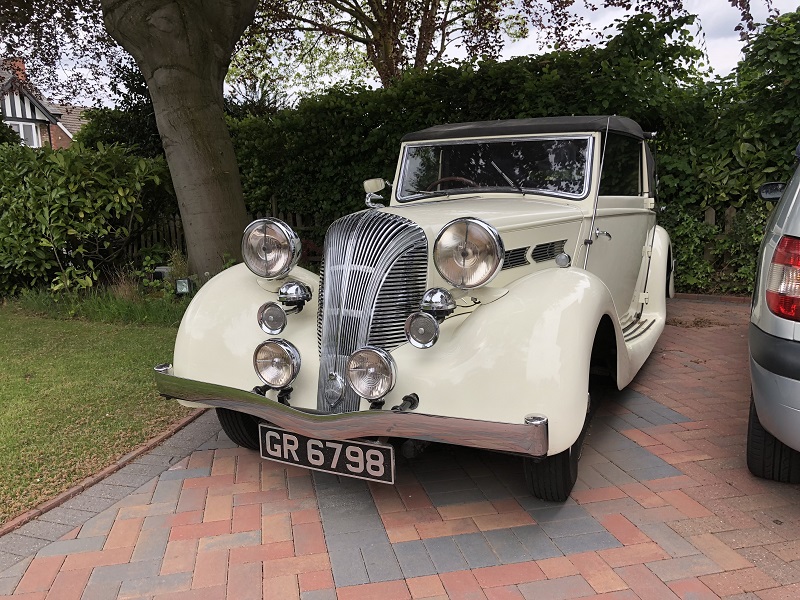 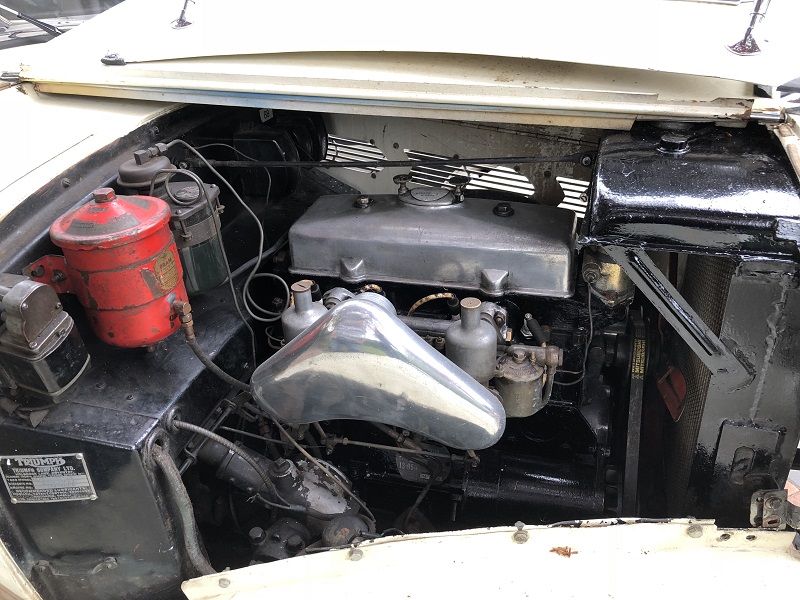 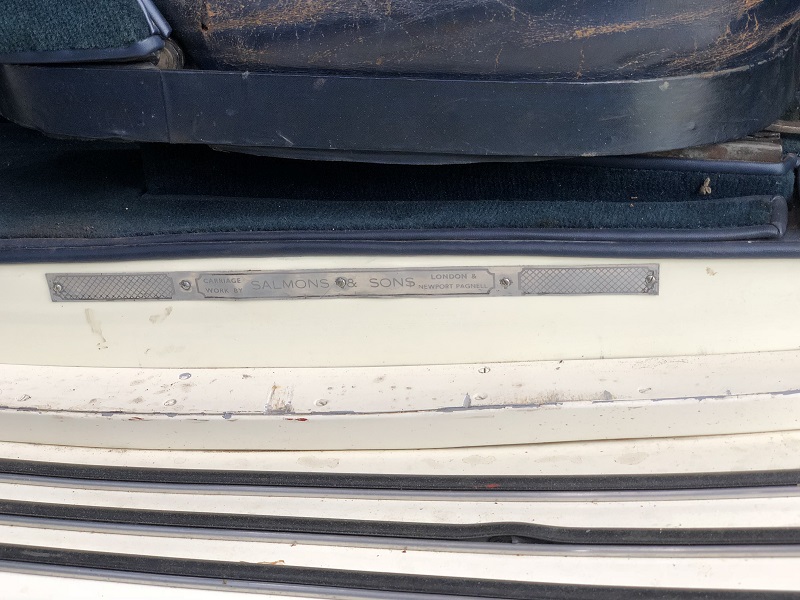 A door card – room for improvement? John thinks so 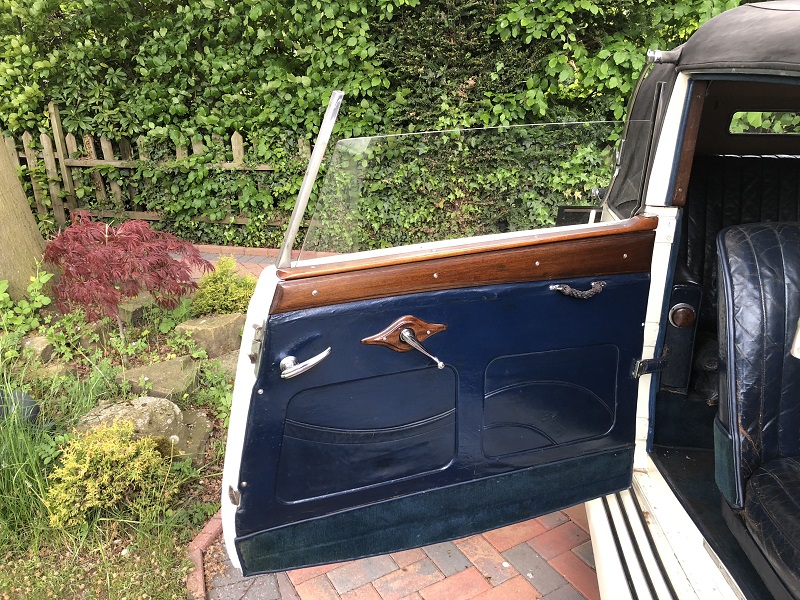 We are very grateful to Mandy and John for letting us crawl all over their cars.  And we didn’t even disturb the second cat in our story.  Which is hardly surprising, because it isn’t real – and so never scratches the paintwork! 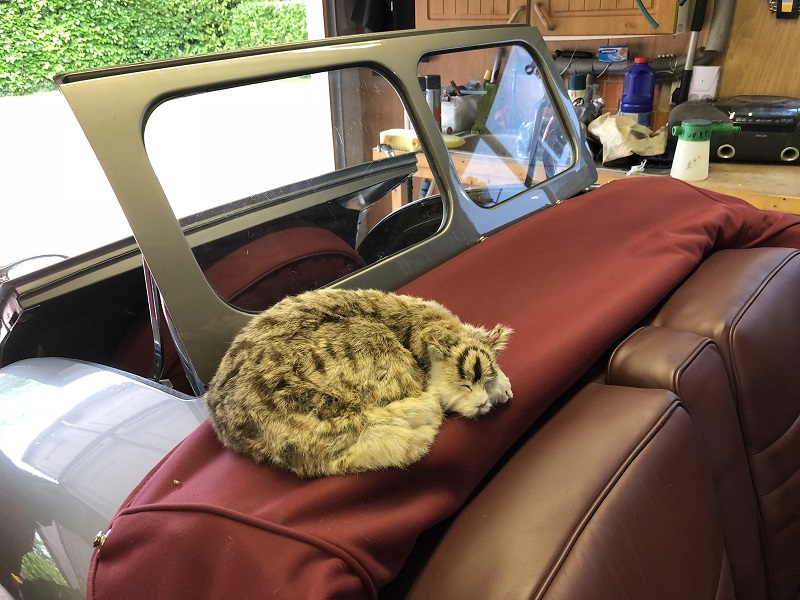