END_OF_DOCUMENT_TOKEN_TO_BE_REPLACED

A Detailed History of the Straight Eight Automobile Engine 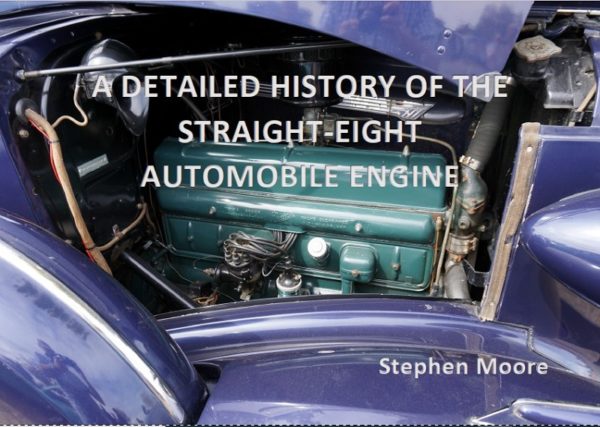 A few weeks ago, we announced this important book by Stephen Moore.  We are now able to review it in full.

This is an outstanding piece of work.  It is a meticulously researched reference work of enormous depth and breadth that readers will return to again and again.  It is written in a concise and thoroughly engaging style.  It gives facts and the stories around them that will delight and absorb, about nearly 300 makers of straight-eight engines and cars.  The technical details of the reasons for and the development of the straight-eight are thoroughly explained in a way that enlightens the non-technical reader and satisfies the technical one.

The book is not printed but is a PDF on a USB stick.  This gives many advantages for a work of this kind.  With 300,000 words on 846 landscape pages, it is far cheaper to buy than a printed book; it needs no index, because it can use the Adobe Reader Find function; and it is easy to read, because pages can be magnified to suit the reader and to home in on details in charts, illustrations and diagrams.

This is far, far more than a simple listing of the cars made with straight-eight engines.  Chapter 1: About This Book sets the scene and explains what a straight-eight is, what is included and excluded from the book and why, and challenges of achieving historical and mathematical accuracy and how these have been overcome.  Chapter 2: Historical Overview and Chapter 3: History by Country provide a superbly structured and clearly written exposition of the position of the straight-eight in the world of the car, its development and its ultimate demise.  These chapters are illustrated by pie-charts and graphs that bring to life each piece of information, from the overwhelming predominance of the USA in straight-eight production (more than 99% of over 10 million ever built), to the relative importance of other countries and their major protagonists.  Each section on the main straight-eight-producing countries starts with its historical context and follows with production figures of the top manufacturers using these engines, and fascinating one-line entries on others, from pioneers through short-lived makers to post WW2 survivors – and always a section on racing car makers.

Chapter 4 covers competition successes by straight-eight cars, and Chapter 5 is a big one: Technical Development of the Straight-Eight Engine. It explains the reason for the straight-eight’s use, and its advantages and disadvantages.  It gives concise descriptions of all the elements of the engine, and comparisons of their use in straight-eights and competing formats, from crankshafts through carburettors to spark plugs.  It does this in language perfectly understandable to the non-technical.

Chapter 6 covers Makes and Models; according to Stephen, every series-produced automotive straight-eight engine.  It is here that readers can immerse themselves happily in the story of the well-known and the obscure, from Alfa Romeo to Atsuta and from Voisin to Veronac.  Every entry contains a history, specification tables where available, and photographs where possible.  The text is engaging and authoritative.  Stephen admits that his sources are mainly books and articles rather than original manufacturers’ archives, but sampling some of nearly 300 entries reveals an astounding depth of investigation and a host of fascinating tales of success and failure.

The book closes with a chapter on important examples that are not straight-eights (but are vital to completing this comprehensive history), a timeline of straight-eight firsts, a glossary of terms, and over 400 references to sources – not linked to the main text but serving to show the thoroughness of Stephen’s research.

This is an essential addition to motoring history, and a beautifully written one.  It is very highly recommended.

Price: The price of the USB stick is NZ$ 65.00 (around GBP 34.00 or USD 47.00 at current rates) plus postage & packaging. If you wish to buy the book, please go to https://www.straight-eight-engines.com and click on the Shop tab for further details. If you proceed with the purchase process, you will be taken to PayPal to make payment using your own currency. Postage varies according to destination and this is also accounted for during the purchase process. Finally, copyright will be defended and copies of the PDF must not be made for onward transfer or sale.

Description: PDF on USB stick.  868 pages.  300,000 words.  Just under 300 makers covered and 434 reference works listed in the bibliography.  329 images.  45 charts, graphs and tables, 43 of which are original.  567 engine specification tables, plus specifications for all Continental, Lycoming, Gordini and S.C.A.P straight-eight engines.