END_OF_DOCUMENT_TOKEN_TO_BE_REPLACED

The answer to the quiz: BMC assembly plant at Blackheath in South Africa 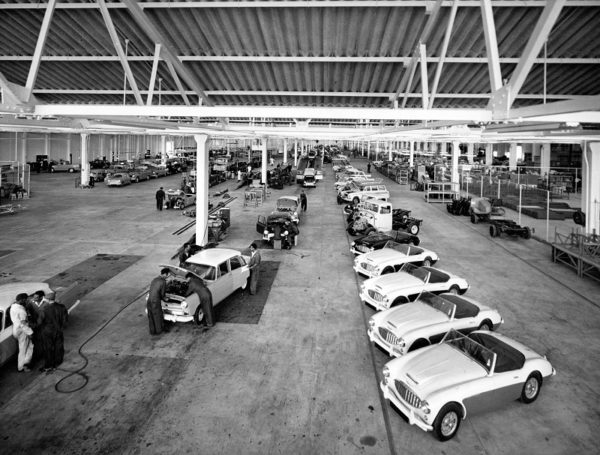 Anders Clausager has given us the answers to the quiz.  The picture was kindly lent to us by Austin-Healey historian Andy McLees.  It shows the Blackheath, South Africa assembly plant of BMC around the end of 1959.

The clues for the date are firstly that the Austin-Healeys in the foreground are 100-Six models, not 3000s (the change was made in 1959); the Farina Cambridges are A55 Mark II 1959-61; the Minis in the background were introduced in August 1959.  Finally, there are one or two examples of the Austin A95 Westminster pre-Farina Countryman estate cars, discontinued in 1959.

What puzzled even Anders (but not for long – read on) was that behind the Austin-Healeys are a couple of truck chassis with what looks like Morris-Commercial cabs of the type before the larger Morris-Commercials (3 to 7 tons) adopted Austin-type cabs in 1955-56, but they must be 1.5 ton LC5 models which stayed in production until 1960, and some were even badged as Austin. There are also two of the larger Austin-based trucks towards the back left of centre.

Our thanks go to Andy McLees for the image and Anders for the comprehensive information.