END_OF_DOCUMENT_TOKEN_TO_BE_REPLACED

by Andy Plumb 2021 review by James Loveridge “Tipping Point: Designing a Great British Underdog” has benefited from the...

END_OF_DOCUMENT_TOKEN_TO_BE_REPLACED 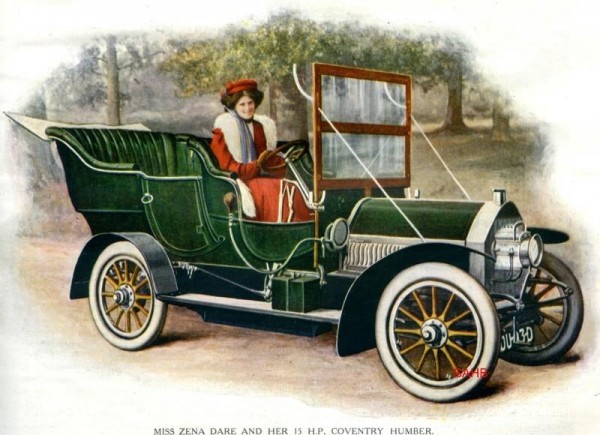 Colour images of mechanically propelled vehicles were exceedingly rare before 1900 and they did not become abundant until many years after this date. Some there were though, and this is an example from a Humber advert of December 1906 that extolls the merits of the firm’s 1907 models – that is its cars, not the occupant! Before the century’s turn there was no real motor industry in Britain and although the atmosphere was full of good intentions, it was really only the Coventry-made Daimlers that from mid-1897 were produced in reasonable numbers, with an approximate total of around 300 cars sold by the end of 1900.

Humber was but one of many cycle makers that had a go with powered vehicles before 1901 but interesting though their early efforts may be they were essentially false-starts, as was the case with the other pioneers. Two years on and they had set off in the right direction with a reasonable range of models and their single-cylinder ‘Humberette’ was the first serious attempt at a mass-produced British motorcar.

This 15hp car complete with coachwork cost £340 – roughly the price at the time of a decent family home in one of the better London suburbs. The brightwork on this car is not brass but nickel-plated, a much more common finish than is often these days assumed to be the case, whilst despite the anti-dust screen at the rear no hood was fitted and a windscreen was an optional extra. Also of note is that the tyres are not black but grey, as was the norm then and for many years afterwards.

The registration DU-13-D is a Coventry ‘Trade Plate’, the D being the single letter allocated to Humber who had at least 34 of these plates. There was no logical matching of the letter to the manufacturer’s name – Daimler had ‘B’, Maudslay ‘H’, but all other makers used the sequence as in DU-X-1, only Humber always put the number in the middle – and nobody seemed to mind!

Zena Dare (1887-1975), here at the wheel, was a well-known actress, singer and music hall artiste and such ladies frequently appeared in advertising of this period.